Trollhättan is another of those places people like me are just going to like. Historically it was as far up the Göta river as boats could come into the interior of Sweden before hitting some inconveniently placed 30m high waterfalls. All that is in the past, now, with the falls bypassed by locks and canals. Each lock is hacked or blasted out of solid rock which means, once it’s hacked, there’s not much more you can do with it when it’s served its time, apart from abandon it and start a new one. So, the old locks are still there in successive generations of size and depth, from the original which could barely have handled a narrowboat (and never handled anything; it was just too ambitious in height to for the gates to have withstood the pressure) to the present day one which can take small ships.

And what of the falls themselves, you cry? Tell us, for we must know! Well, they’re still there. Again, there’s not a lot you can do with a redundant set of falls that no longer have water running over them. They’re sealed off by sluice gates and look quite picturesque when they’re dry …

… but even more picturesque when the sluices open for 10 minutes at 3pm every day to relieve pressure and 300,000 litres a second comes barrelling down the gorge.

A bit like watching those tsunami videos, it all seems to be happening so slowly. The water seems to take forever to reach you and yet suddenly it’s there and you’re really quite glad that you’re not, and are in fact on the 30m high bridge overlooking the scene.

If Ozymandias had dug into rock rather than built statues of himself out of it, there would be a lot more evidence of his works to despair at.

I have a new hero and I bet you’ve never heard of him, unless you’re Swedish. Gustaf Dahlén: self-taught engineering genius and polymath, inventor of cookers and lighthouse equipment among many other things, one of the founders of AGA, and social visionary. Raised on a farm with no education beyond the basic that the village school could provide, he went on to create an engineering company with fingers in a thousand pies and which pioneered modern concepts like profit sharing and employee engagement.

The Dahlén Museum in Stenstorp is retro-engineering heaven, and where else would you find a heart and lung machine with an AGA logo?

And wood and formica, and buttons to press and dials to turn. So many …

Not to mention an actual AGA car (briefly manufactured in the 1930s) and, the thing that really made him famous, lighthouse equipment: pre-electronic, pre-electrical and only requiring precision engineering and sound mechanical principles to work. Like his sun valve, a device powered only by thermal expansion to make sure lighthouse lights only came on at night, and which could also drive the rotation of the mechanism. The one installed in Stockholm harbour worked flawlessly until the 1980s without any servicing.
Sadly neither of those photograph particularly well in the museum.
Two things in particular that I like about him. One was that, as a teenager, he anticipated Wallace & Gromit by 100 years and invented a device that would turn on the light and the heating and make the coffee before he got out of bed in the morning. He was going to go one step further and make a device that would tilt the bed to get him out of it, but was talked out of it by his younger brother, who had to share the bed with him.
The other is that even though he was blinded  for life at the age of 43, in an explosion while testing the pressure-holding capabilities of different types of cylinder, he was an incurable optimist. His motto was “Var Optimist” (“Be an optimist”) and he had hundreds of badges made saying just that, which he would whip out and pin onto any prophet of woe that he might encounter.

The west coast of Sweden is flat, fertile farmland, except where it isn’t. Where it isn’t is because of rocks – large, red-grey protrusions, dropped and worn smooth by ice thousands of years ago and jutting out of the soil. At the bottom end of the scale are the ones the size of a small car or maybe a house – they can be landscaped around. At the top end are the ones tens of metres high and the size of a city block. These are more accurately known as geography and there’s no landscaping here – they are the landscape and you just go around them.

At one point, the flat farmland disappears below sea level but the rocks remain. At this point you now have an archipelago.

Fjällbacka is a town on the west coast, overlooked by the 75m high Vetteberget. I decided that if I weren’t already married, this is where I would have proposed. We were there at about 5pm in the afternoon, which is nowhere near sunset at that latitude but still the sun is low enough to sparkle on the water and the black dots of the islands stretch as far away towards the horizon as you can see. If you’ve never read Ursula le Guin’s Earthsea novels, now would be a very good time to start. 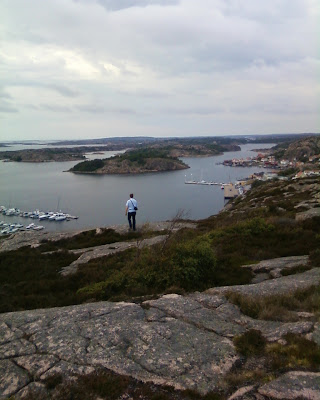 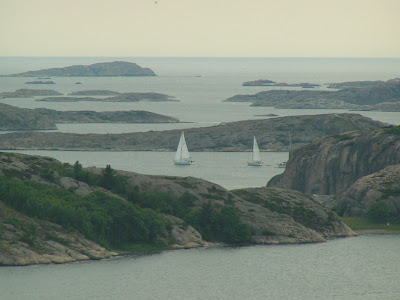 It was also a favourite haunt of Ingrid Bergman and they remember her fondly. 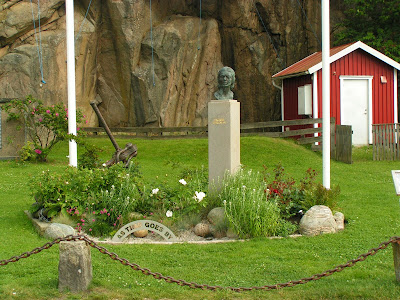 We also took a boat out to Väderöarna, largest of the islands and Sweden’s most westerly inhabited possession. Now I was not only thinking of Earthsea but also of I, Claudius, as the fate of several characters at one point or another is to be exiled to a small barren rock in the Mediterranean – the worse your downfall, the smaller and more barren the rock. If Sweden went in for that kind of thing, this place would be littered with exiles. So inevitably I got to thinking up plots and, do you know, I might actually write a story – now there’s a thing. 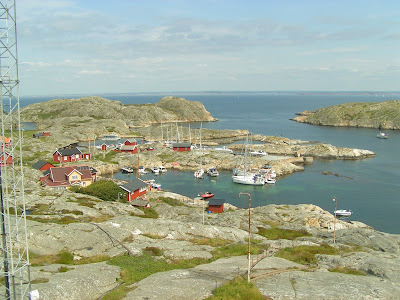 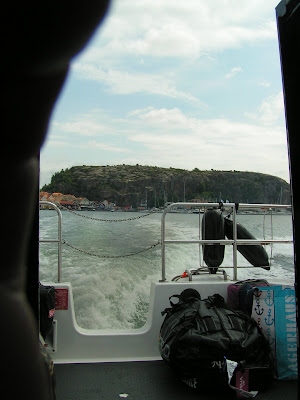 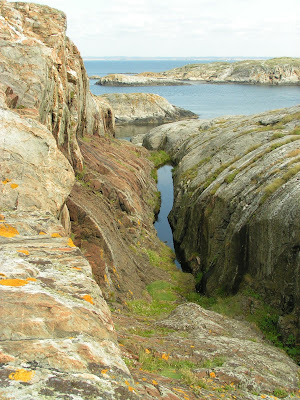 But there’s things to see inland too. What actually brought us to the area in the first place were the rock carvings of Tamunshede – a late Bronze Age, World Heritage phenomenon. 3000 years ago someone worked out another use for those rocky surfaces – you can carve on them. (Rather, chip away at them to a depth of between 0.5-1cm.) There are four main locations all within a couple of miles, all on south- or east-facing stones, and all on stones where the water continues to run down for a while even when it’s stopped raining. They have been coloured in by present day experts so they can actually be seen – they are so faint as to be invisible in their natural form. 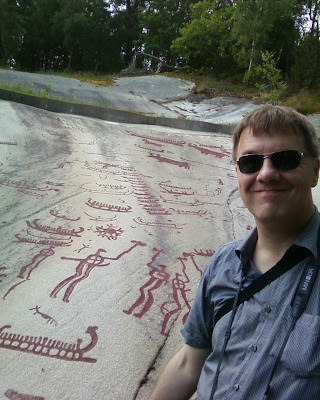 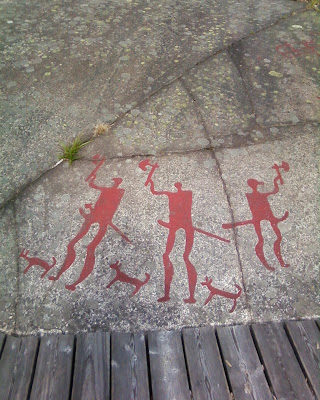 Of course, we only have modern day interpretations to go on, but …
A lot of the time, men are attacking each other with axes. 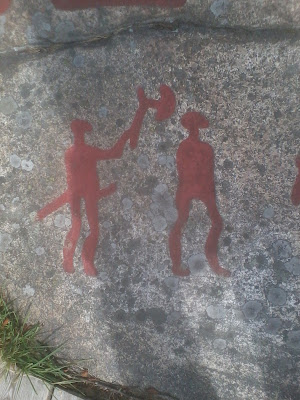 At one point they are distinctly on a boat as they do so. Were they having sea battles back then? 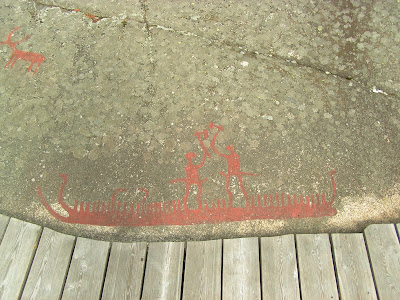 From the design, the boats are clearly ancestors of the Viking longships, though experts say boats that size couldn’t have been built back then. Therefore, these boats have a symbolic, religious meaning – maybe a way of voyaging to the afterlife. Well, maybe – but even so, were the longships eventually built that size because someone realised that in principle there was no reason they couldn’t be? 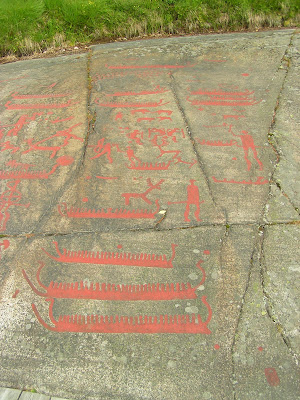 And if the boats are symbolic, why are guys still fighting on them?
All the bows found from that time are longbows but these are quite distinctly short, like those used by Asian horsemen. Was there contact? No reason why not. All you have to do is keep going east (or from the horsemen’s point of view, west). 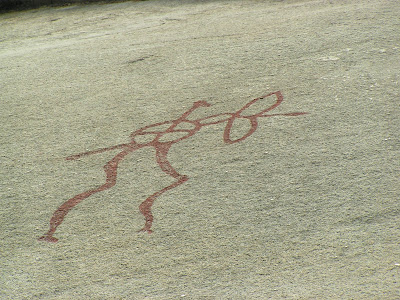 You can’t help but notice just how male the men are – for some reason the women are identified by long hair rather than anything, um, organic. To the right sort of mind it gives rise to all kinds of humour – no, change that, I mean one particular kind of humour. I may have thought up a few jokes but I won’t share them and I didn’t buy the book. 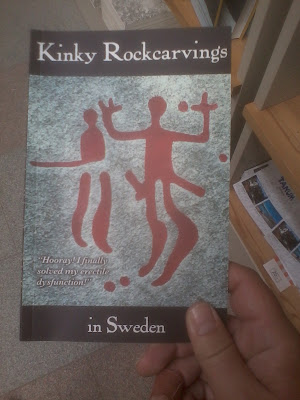 And (we learned) the reason horsemeat isn’t generally eaten in Sweden is because eating horsemeat was seen as a pagan practice and therefore discouraged by the early church. So religion has its uses.