In Switzerland, apparently, speeding fines are determined by the speed you were doing and by your ability to pay. So, the Swedish gent who was clocked by Swiss police doing 290km/h or 180mph in a Mercedes sports car “could be given a world-record speeding fine of SFr1.08m ($1m; £656,000), prosecutors say.”
This being Switzerland there will be four words for “schadenfreude“, one of which is “schadenfreude”.
And yet …
This guy is Swedish, which I happen to know means he comes from a land where the average speed limit is 80 or 90km/h. Occasionally, just occasionally, a really good stretch of road will let you up to 100 and sometimes they go mad and let you do 110 for a stretch of about five miles before welcome sanity kicks in and they rope you back to 80 again.
For ease of reference, 8km = 5m. Do the maths.
Approaching a junction, even if you’re in a 110 zone, the limit goes down to 70. And there are a lot of speed cameras. They’re sign-posted but they’re also unobtrusive – just slender little blue poles by the side of the road.
Not that most Swedes pay the limits the slightest attention, as far as I could see. We were rocking in the slipstream of Saabs and Volvos more times than I could remember. But even so, I do sympathise that this guy has probably wanted to go fast since he was born, and putting him a Merc in another country is just asking for trouble.
Should have been a fighter pilot, then … 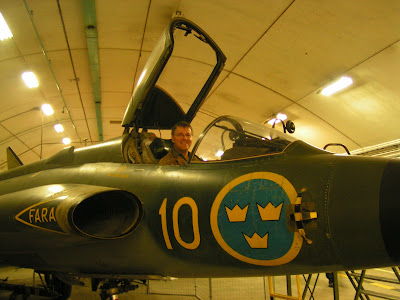 For anyone googling “good places to eat in Gothenberg”, we recommend the Cafe Caprese on Kungsgatan. For anyone googling “places to stay in Gothenberg”, the answer is the Best Western Hotell Göteborg. It’s reasonably priced, clean and friendly, right on the waterfront and (most of) the rooms have astonishing views over the harbour. Bonusbarn’s didn’t but who cares, he was only there one night. We were there for four.

Last year it became clear that our annual in-law viewing pilgrimage to Sweden was approaching crisis point. My father-in-law was getting more and more frail, imposing social obligations upon himself that he was unable to meet, and we had seen every single thing worth seeing within a daytrip at least once before. Bonusbarn was on the point of open rebellion. So, this year it was different. First a brief, flying visit to the relatives, and as my father-in-law now lives in sheltered accommodation we stayed in my sister-in-law’s apartment. TV! Internet! Water straight from the mains, not from a well and so laced with iron it tastes like blood! No sign of a mouse dropping anywhere near a food preparation area! (Or indeed, before my sister-in-law screams and comes over to kill me, anywhere else either.)

And then we went to stay in Gothenburg. I’ve only caught glimpses of this before now, en route to and from the airport. It looked like an exciting, historic, European town with a harbour and trams and long boulevards and wide, cobbled squares. And guess what, it’s all of those. 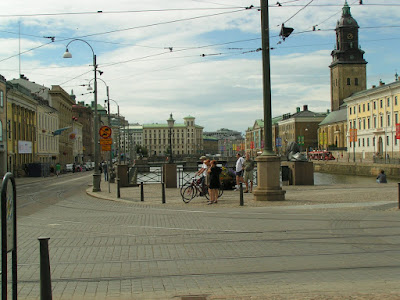 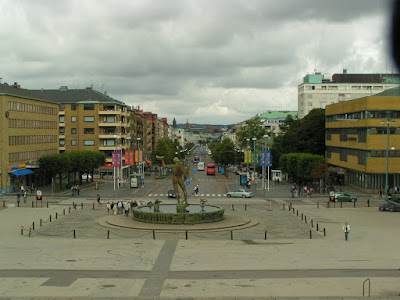 The squares are ideal for sitting in and partaking of coffee and sweet cardamom buns while you engage in a text conversation with your mother back in England. This being the southern end of Sweden, the ground is mostly successful at being completely flat, but here and there are outcroppings of smooth rock left behind by the glaciers. There’s no doing anything with them except living with them, so they got built around or onto or into. So, you may turn a corner off a boulevard and suddenly find yourself facing a sheer rock face, or a ramp, or a vertiginous little stairway that goes up or down to somewhere, adding exciting new and random elements to your day. Meanwhile the whole city sparkles in the sunshine – in fact, weather was quite unreasonably good for somewhere the latitude of Inverness. Short sleeves every day, short trousers most days, every meal and snack other than breakfast was eaten outside somewhere. The first drops of rain fell literally as we got off the bus at the airport, which I think is good Swedish courtesy to a T.
The harbour is in fact just a wide river, broad and sweeping and a beautiful thing to behold from ground level or a fifth floor hotel room or from the top of one of the aforesaid outcroppings. 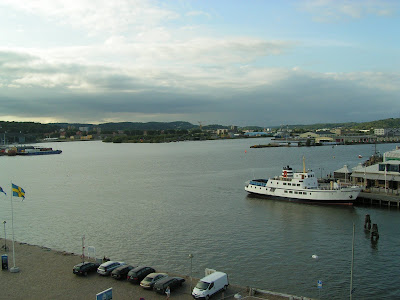 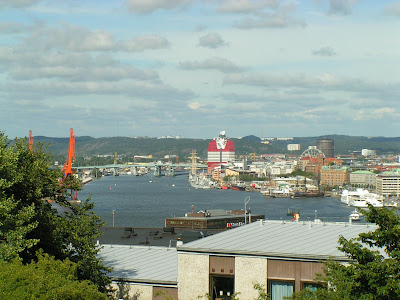 From our room we could look right to the historic bit, or left to a still fully functioning modern shipyard. 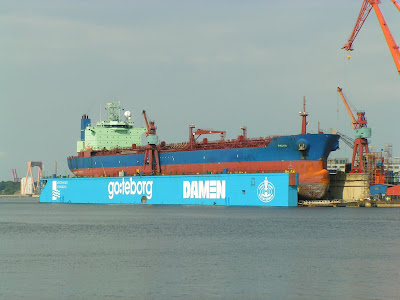 For the culture, And There Was Light is a highly recommended experience, should it come to a city anywhere near you – a hightech, multimedia exhibition about Leonardo and Michelangelo and Raphael, put into the context of the times and politics of Rome and Florence and Milan: the things they did, the ways they overlapped. I had never realised, until seeing a lifesize replica (still haven’t seen the original), why Michelangelo’s David stands as he does in that slightly poncy pose. His left hand is holding his sling and his right hand, which you can’t really see from the front, is holding the stone with which he’s about to zot Goliath. He stands like that because he is thoughtfully sizing up Goliath across the valley, or possibly thinking “crikey, are other blokes’ all that big?”
(Un)fortunately a ticket into And There Was Light also gets you into the maritime museum, the city museum, the art museum … we were pretty well museumed by the end of it. Even before getting to Gothenburg, we passed through the Aeroseum, an airforce museum inside an old nuclear bunker next to the City Airport. I got to sit in a Saab Draken. 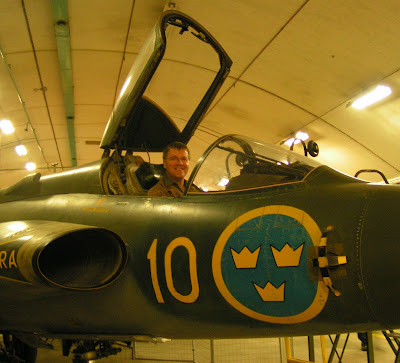 On the harbour front there is also the Maritiman, a static display of ships that you can walk around and clamber over and explore. These include a destroyer (I much prefer the Swedish term “Jagaren” – Hunter!) and a Draken class submarine. So I did a lot of Drakening, one way or another. 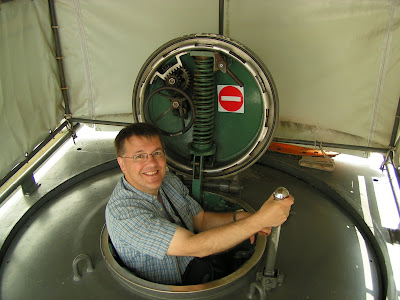 For those of a more traditional bent, this chap was moored opposite the hotel … 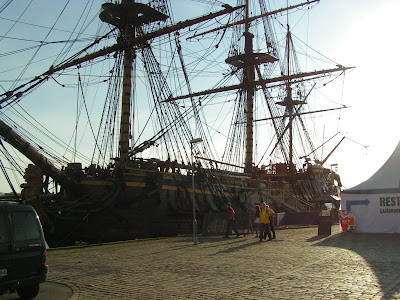 … A genuine reproduction East Indiaman. So, from now on, whenever CS Forester or Patrick O’Brien mentions an East Indiaman, I’ll know what they’re on about. 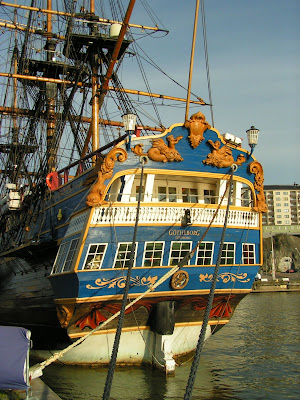 I love Gothenburg and want to go back. Next year, the coast and islands …
Well, it says it like it is. 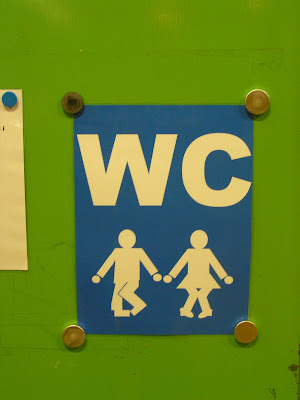 One church has a particular missionary focus on Japan. Here is one of its mission tools for younger readers. 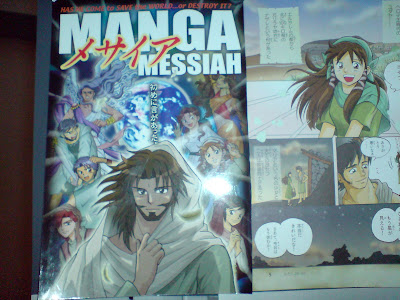 This advert for a conference organiser translates as: “Mummy has gone to a conference where she can eat as much popcorn and icecream as she likes”. 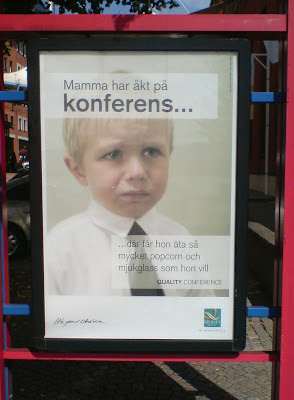 This restaurant could have put anything it liked on its wall … so naturally it chose the Fibonacci sequence. 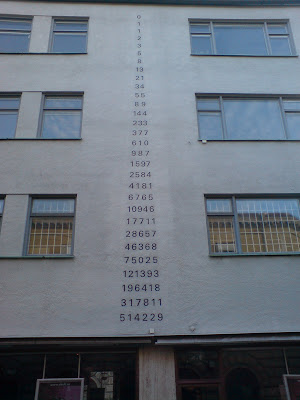 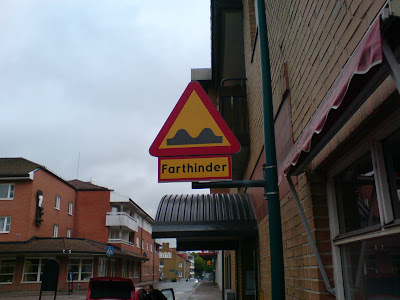