I don’t read much heroic fantasy, for various reasons. A good one is that it all comes in such fat multi-volume series that I simply don’t have the time. But a deeper, slightly more sneaking one is that, well, it’s all a bit silly, isn’t it? It’s not real. Science fiction is generally set in present-day or future societies that could happen. Fantasy is based on past societies that didn’t happen, or can’t happen, so there.

This isn’t entirely fair but it’s always there. Good heroic fantasy gets around it by being good. I recently read Joe Abercrombie’s The Blade Itself and enjoyed it a lot: for the characters, the world-building, the humour and the sheer enjoyment of the writing. But still I get this nagging feeling that tells me I should be reading something else, and it isn’t at all helped by reading something like Jan Guillou‘s Templar Trilogy.

Guillou himself is an interesting character – an investigative journalist and spy writer who did time in jail for revealing that the land of cuddly Volvo-driving Abba fans has a secret intelligence agency that can match the CIA dirty trick for dirty trick. That’s life on the front line of the Cold War. His character of Arn Magnusson is a local Swedish folk hero because Guillou cleverly takes Arn’s fictitious life and wraps it into real history in the form of the birth of the modern kingdom of Sweden. (Where I happen to be right now, but that’s for a later blog post.) For instance, with a bit of handwaving the fictitious Arn becomes the grandfather of the very real Birger Jarl, whose grave I have seen and once sort of wrote a poem about. All the locations are visitable, and most of them are within a few miles of my inlaws. One of life’s innocent pleasures is to watch Bonusbarn’s face when he asks with resignation why we’re looking at yet another church and we say “This is where Arn …”

I was introduced to Arn’s adventures by my future wife several years ago, but it’s taken till now to finish them because at first only the first two books were translated into English. After that the publisher pulled the plug … until recently. Different publisher, different translator, still the third book. Finally I know how it ends! Though given that Sweden exists, I had a shrewd suspicion.

In the first book, The Road to Jerusalem, Arn is born into minor Swedish nobility and for various reasons spends most of his childhood raised by monks, including an ex-Templar who teaches him various extracurricular non-monkly fighting skills. This is handy because at the end of the book Arn inadvertently sleeps (consecutively) with two sisters (hey, it could happen to any innocent young lad from the monastery), one of whom is his true love and one of whom is a scheming minx. For this sin he must do 20 years penance as a crusader in the Holy Land.

This brings us to the second book, The Templar Knight, which switches between his story and the story of the second crusade, and his beloved Cecilia doing her own 20 years penance in a convent back home. From her perspective we see the birth pangs of the new Swedish nation, while Arn’s purity of heart, nobility and Christian virtue earn him the respect of Christians and Muslims alike, and make him one of the few crusaders, and very few Templars, to make it out of the Holy Land alive after the disastrous Battle of Tiberias. And finally – finally! – in Birth of the Kingdom Arn returns home determined to use his military skills and considerable wealth to bring peace to his homeland and forge it into a new nation, the kingdom of the Sveas, or Svea Rige, as you might call it.

If you read heroic fantasy for the world-building then medieval Sweden is described in enough detail to suit your every need, with no feeling of anything being contrived just to get a little extra buzz or laugh. (Plucking just one example from the air, like Arn and Cecilia’s wedding night being unable to commence until the archbishop has made it up the stairs to bless them in bed.) If you read it for the military clashing and banging then Arn has it in spades, and the version of Christianity practised by the Swedes – a mixture of literalism, ritual, pragmatism and Marian veneration, all with residual pagan overtones – presses all the right buttons for anyone expecting arcane religions and magic. It’s exactly the same as reading heroic fantasy, except that it isn’t and it’s a guilt-free trip.

Next up: Robert Harris’s Lustrum, follow-up to Imperium, which I have previously reviewed and which has a similar effect.

Note: nothing herein in any way precludes me trying to write heroic fantasy if I ever decide that’s the direction my career should take.

Pause for a moment and consider the end of eras.

Our usual habit is to come out to Sweden for a week, make a base at my father-in-law Morfar’s farm and venture out on day trips. Sadly, this habit is now so usual after many years that Bonusbarn is quivering on the point of mutiny, having seen all the local sights so often he could do the tourist commentary. Plus at Easter everything’s closed and other typical Swedish activities – walks, swims in lakes – aren’t really viable. So we’ll probably next be in Sweden next summer, 2010 – by which time my stepson will be an 18 year old school leaver, quite possibly with plans of his own for the summer.

And consider the old man himself, who is always delighted to see us but it clearly becomes more of a strain every time he does. He gets stressed that he isn’t being hospitable enough – but, confined to a wheelchair, that translates into micromanaging Best Beloved to ensure that she is providing us with the kind of service he would like to give us. Which really isn’t necessary. The slightest departure from his decreed norm causes him endless worry, and meanwhile he gets vaguer and more forgetful; unable to remember (for example) if he’s already demonstrated to us how he uses his pee bottle, and unable to conceptualise that maybe we don’t want a demo anyway.

In short, the kindest way of staying in touch in future will probably be a long weekend on the farm – we could probably coax Bonusbarn out that long – and then explore further afield, while we send the young man gratefully back home to his friends and wireless internet. There’s plenty more of the country I’d like to see and Best Beloved would like to show me. And Morfar is always convinced that each time he sees us will be the last anyway.

But it was a good stay. Previously we’ve had snow at Easter: the snow poles are still out on the roads and the hire car (a Volvo, the best result yet in the Avis lottery) still has studded tyres. And yet the weather was so summerlike that I often wished I had bought a light jacket instead of, or at least as well as, the winter coat. We didn’t have an Easter bonfire because Cousin Valter, who as a mere sprog of 82 is responsible for physical and maintenance activities on the farm, decreed that the undergrowth was too dry. Then the wind blew and I was grateful for the woollen jumper and cords. A season of contradictions.

I still love that little house on the Västergötland prairie. It’s made of wood, but so snug and tight that I could sit out a blizzard there. And so quiet. There were times I quite literally could not hear a thing apart from my own heartbeat. No one else in the house, no traffic, no wind, nothing. Quite astonishing. But it is a relief to know that tonight I sleep in my own bed, which must be as much younger than me as the one in Sweden is older.

We met Senior Niece’s baby, who is most babylike with a cute smile and habit of vomiting without warning or apology. As expected, really. 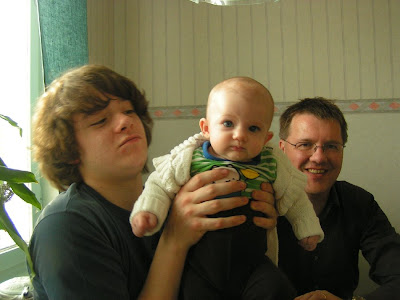 I enjoyed the unusual (for a writer) experience of a couple of hours’ honest work, helping Valter split logs. He has a machine for the purpose that pushes them against a metal blade and they split without any apparent effort. Harder than it looks. 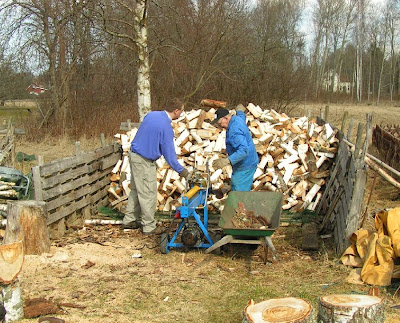 Power lines run through some woods at one end of Morfar’s property, and new laws increasing the amount of free space around them has led to a few extra logs needing to be dealt with. 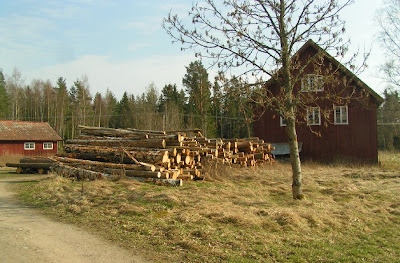 And then of course there was Easter. A fairly High Lutheran service but I was raised fairly High Anglican so can cope with that. The words are pretty easy to follow – the Lord’s Prayer, the creed … Or this one? “Helig, Helig, Helig, Herre Gud Sebaot; Himlarna och jorden är fulla av din härlighet; Hosianna I höjden …”

I had my annual reminder that the words for Spirit and Duck are the same: thus Helig Anden could be the Holy Spirit or the Holy Duck. You have to take your best guess.

It was an old church but refurbished in a modern style inside – big windows, pastel shades, pine furniture, comfortable chairs, full of light. The choir really sounded like they meant it, with some songs and tunes so joyful it didn’t matter that I understood one word in ten. During communion they sang a Taizé chant, over and over again, and kept singing as they went up to the rails. This meant that we who were among the last of the congregation to go up suddenly realised the singing was following us. Quite beautiful. The closing hymn was sung in question-and-answer style, with the men essentially asking what this Easter thing is all about and (appropriately for the season) the women telling them. It was a dignified, proper hymn with a light and happy tune that I’ve not heard before, but I wanted to take a copy to give to our own worship leader and say “more like that”.

The sermon – I was told later – mentioned a Palestinian family whose 12 year old child was killed by an Israeli soldier. They donated the child’s heart and it now beats inside a young Israeli. The two families have got in touch and as much as possible are friends. And that, said the pastor, is the Easter message. Hear, hear.