Problematic, as it’s hard to get a decent picture of Sky, especially from the time when Francis Monkman was in the line-up, which was when they produced their second and best album. So here’s my second favourites, Genesis. 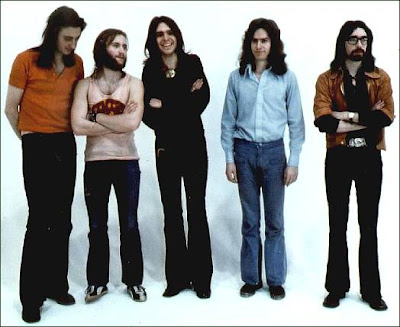 Sky (and to a lesser extent Genesis) were my gateway into decent modern music, taking me out of the commercial comfort zone of the charts and into new unexplored territory. I was familiar with Bach’s ‘Toccata’ as it was a staple of the chapel’s voluntary repertoire, and then I heard Sky’s version – fast, pacy, with synths and electric guitar and a thunderous drum beat. This was pop, but a pop version of an accepted classical staple, and one of the group was a world-famous classical guitarist,so that made it okay. And while I have always instinctively shied away the hip and trendy, even when I was in my teens, these guys were ancient. I mean, they must have been at least in their thirties. (By which age, incidentally, Genesis were completely off the boil.) So that all made it even more okay.

I saw Sky’s Westminster Abbey performance in aid of Amnesty International on TV and was intrigued enough to buy their second album, the impenetrably named Sky2. This remains the best of their albums, for its sheer quantity of material and its variety: ‘Toccata’ and classical guitar duets and a six minute harpsichord solo by Francis Monkman (‘Gavotte & Variations’) and a piece played entirely by drummer Tristan Fry on various percussion instruments (‘Tristan’s Magic Garden’) and the humorous little squib of ‘Tuba Smarties’ by Herbie Flowers and heavy, pounding electric guitars (‘Fifo’, ‘Vivaldi’) that wouldn’t be out of place at a prog rock gig. Sky were also the first group I saw play live, one night at the Bristol Hippodrome.

Further Sky facts: my present CEO was involved in the production of the Westminster Abbey performance, and tells me that one of the band claimed to have been the first man ever to smoke a joint in the organ box. Possibly an optimistic claim, I don’t know. I also gather one of the band subsequently did jail time for getting over-creative in the accounts needed to keep his recording studio going. See, they’re bad boys after all.

Nature and technology coincided in a dramatic multimedia event as I drove home this evening. Classic FM was playing the William Tell Overture – not the famous bit at the end portrayed variously by the Lone Ranger, Mike Oldfield and Kenneth Williams but the whole four-part movement, of which the second represents a storm whipping up over Lac Leman: first a few raindrops and then a sudden escalation into nature’s fury, beautifully conveyed through the orchestral medium.
And just as the storm hit Geneva on the airwaves, so it hit Harwell in real life: the dark clouds over Didcot were suddenly much closer, the wind was whipping the leaves off the trees in a cloud you could barely see through, and then came the rain, so strong I had to slow down.
Classic FM’s marketing department has a surprisingly strong reach. I will look around cautiously the next time they play the theme from Jurassic Park.
Here’s the bit I mean.
Posted by Ben at 6:12 PM

-but otherwise they’re completely the same. I refer to two movie themes by Ron Goodwin, both beloved of Classic FM: 633 Squadron and The Trap (aka the London Marathon theme, played this morning). Orchestration the same, key changes the same … just the notes are a little different.
Tell me I’m wrong.