Once upon a time I had an interview at Warwick University – which turned out quite well – which meant having to spend the previous night in Coventry. So I had an evening in a new town to myself, and did some wandering around, and came across the two cathedrals – the gleaming new post-war barn and the stone skeleton of the old one next to it, burned out by Luftwaffe incendiary bombs. And as I learned the story of the new cathedral, and how German volunteers helped with the work and how it has developed a worldwide ministry of reconciliation, I fell in love with it and decided I simply had to write a story about it.

It took a few years – had to become a writer, first – but I did write it, and it was awful, thrumming with love and Christianity and general goodness, and for sheer ickiness it broke all known records. Fortunately I could tell it icked and sat on it.

Many years after that, by a miracle, good friend Gus Smith (who writes as Gus Grenfell) suggested a way it could be de-icked, at least a little, and I’m eternally grateful to him for the suggestion, which a character takes up in the last few paragraphs. In fact I would go so far as to say atheist Gus (albeit with a Methodist minister father) came up with a much more Christian solution than I was managing: I love these little ironies. Residual ick may lurk in some sentences but overall it is much, much stronger than it used to be. The story finally got written, and published in Interzone, where it came 46th= in the annual readers’ poll, but what do they know? I called it “Cathedral No. 3”, unaware (after three years living in Coventry) that in actual historical fact any new cathedral would be cathedral no. 4.

All this brought to mind by the move afoot in New York to build a mosque near to the Ground Zero site. “Near” is a relative term: one of the comments over at Making Light’s take on the story reminds us that in a city anywhere is “near” somewhere else.

Not dismissing for one second the pain felt by those who lost loved ones on 9/11, it’s this kind of spirit that always lets society move on and improve upon the past. Whenever dictatorships are replaced with stable democracies, or people of different races accept integration as the norm, or no one cares any longer if you’re Protestant or Catholic, it’s because people let go of the hurt. Or, failing that, just shut up and don’t talk about it and go to their graves bitter and wizened but they keep it to themselves and the poison doesn’t leak out into a new generation.

I think a mosque near Ground Zero would be a jolly good idea.

We were married in a half hour service from 10.30 to 11am. Exactly four years later we were sitting in a communion service in Chichester cathedral, lasting from 10.30 to 11am. The parallel didn’t occur to me until later but I thought it was a nice one, especially when Best Beloved pointed out that a communion service is the exact opposite of the rigidly, unyieldingly secular civil marriage service that I once ranted of.

So, anyway, happy anniversary to us as of yesterday.

Chichester cathedral is smaller than my favourite (Salisbury, of course): blockier, more Romanesque, which is my understanding of “small, rounded arches”. A Wellington or a Whitley, if you will, to Salisbury’s Lancaster. 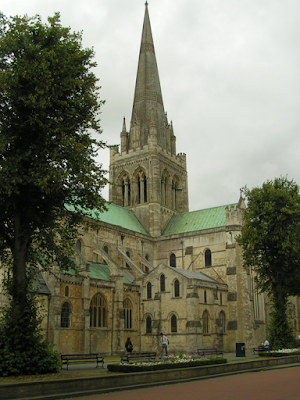 But it has a character very much of its own, especially since, as a community, it made the decision to be a sponsor of the arts and crafts. It was also being extensively renovated right up until the 1990s, still in the original style and stone; but these two facts together mean there is a lot of modern that blends very nicely with the old, and the gleaming white stonework might actually be how the entire building once looked. 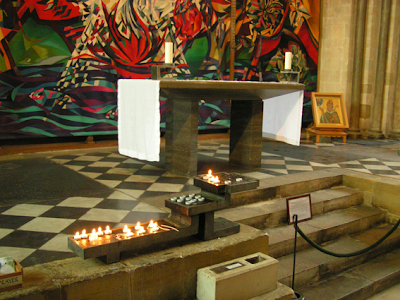 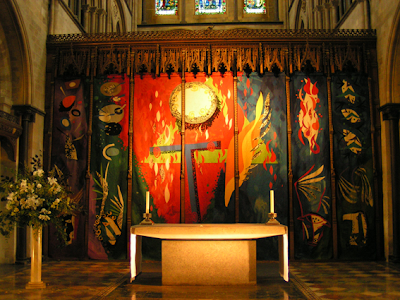 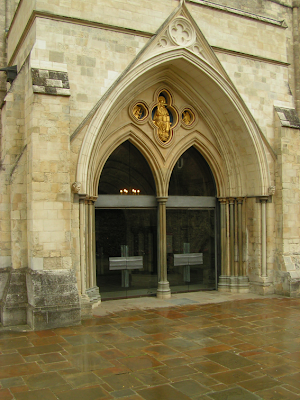 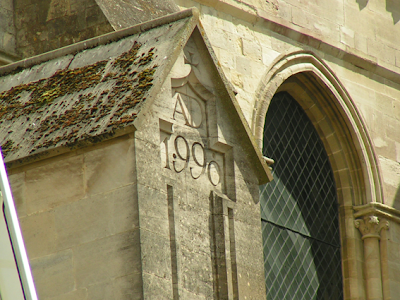 And there’s the more trad cathedrally stuff too. The Arundel tomb actually inspired a poem by Philip Larkin, which is actually quite good. He was moved by the way that the knight has taken off his right glove so that he can hold hands with his wife for all eternity. And it is sweet. 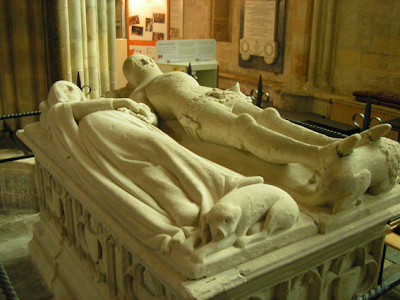 As the local MP, this guy gets a slightly more heroic statue than his manner of death would suggest (plonker). 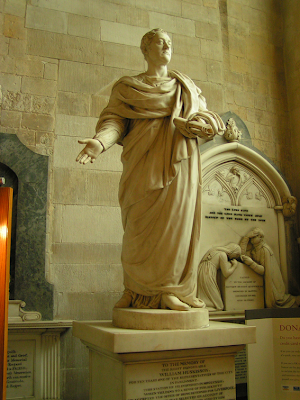 From the department of “they did it different in those days” comes this affectionate memorial. 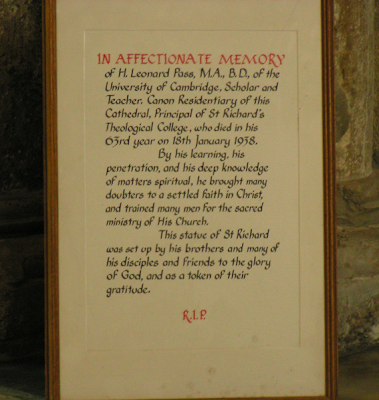 If I had tried penetrating anyone to bring them to a settled faith in Christ then my youthwork career would probably not have lasted so long.

Still with the sponsoring arts thing, outside where the sun had finally decided to shine there is an exhibition of sculptures going on in the cloisters. 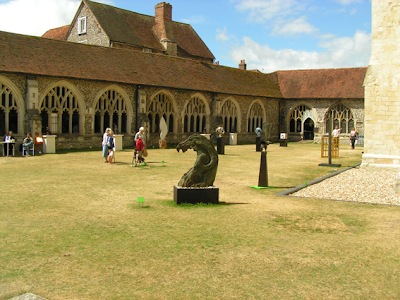 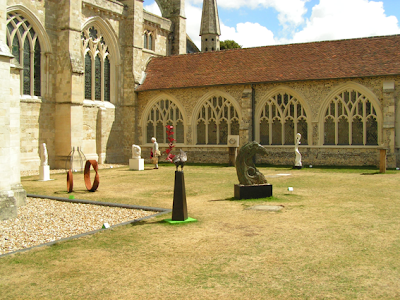 There was also this intriguing display … 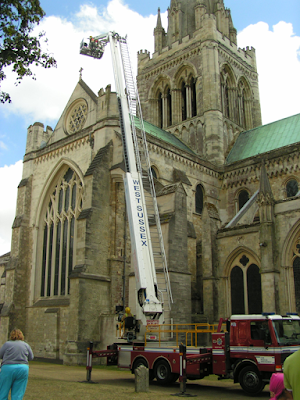 … which turned out to be practice for all those times souls get lost somewhere up on a very high roof and have to be picked up. There’s probably sermon material in there if I contrive it enough.

In other news, I now have an eighteen-year-old stepson. The difference between the adult and child Bonusbarn has yet to be remarkable, except that this year he can steward and take booze to Truck.

I always associate Gloucester with Mike Oldfield’s Tubular Bells II. I think of one, I start to hum the other. It may be where I bought my copy. The album certainly came out in 1992, the year of Bonusbarn’s birth, and that was my first summer in Abingdon. I took a week off work and a day trip to Gloucester was my first major venture out of my new home. I felt quite the explorer, navigating the diabolical Marcham S-bend for the first time in my trusty Renault 4.

So yesterday, our third anniversary and the day after Bonusbarn’s 17th birthday, that was where we went.

Pleasant place. Nice, wide, pedestrianised city centre; good range of shops; and a cathedral, which was of course the purpose of the visit. It achieves the effect managed by all good Perpendicular Gothic cathedrals of making several thousand tons of stone look delicate and lace-like.

The western half, up to the choir screen, is strangely sparse with little ornamentation on walls, floor or ceiling. 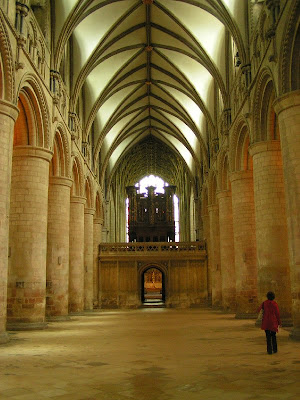 From the choir onwards is where all the ornamentation is. Tombs, side chapels, ornate fan vaulting, beautiful tiled floors. 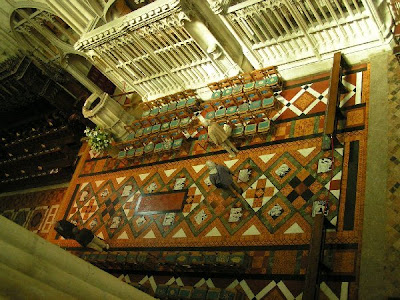 We nearly doubled the congregation of a quickie lunchtime communion service in the Lady Chapel (the celebrant told us our anniversary is also the feast day of St Mary Magdalene; Best Beloved knew this, I either didn’t or had forgotten). Three modern screens behind the altar here give the Saviour a definite hint of pubic hair (left) and a pair of muscular buttocks (right). Not areas traditionally associated with veneration, but the church must move with the times.

Then we went exploring. The cathedral scores especially high in its nook-and-cranny quota by letting the public up to the next level – the galleries set into the walls behind the arches on either side of the choir (at £2 a head, which I don’t remember being the case in 1992). Up there you get a good close-up view of east window, and the Whispering Gallery. The latter really is a surprising feature. Before they put the east window in, you could get all round the east end of the building at that level. Then the window cut one side off from the other. So, they built a free-standing enclosed stone passageway outside the walls – you can see it from the outside – that goes around behind the window. If someone standing at one end whispers, someone at the other can hear it quite plainly. I was standing at one end of the gallery; Best Beloved, in the red coat, indicates the other. 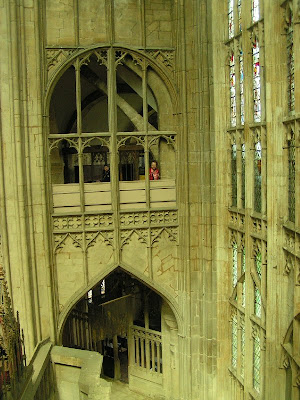 I like the way this side chapel refuses to let anything as plebian as an important support buttress get in its way. It just quietly gets on with its life and pretends the buttress isn’t there. 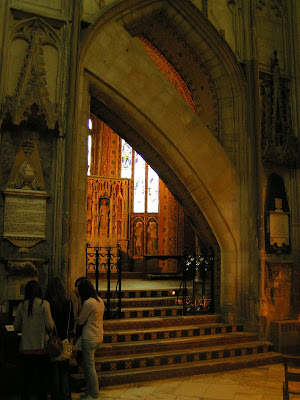 I got the feeling of the cathedral being a physical part of the city, much more than Salisbury where my (still favourite) cathedral sits in aloof dignity in the middle of a neatly mowed lawn. Buildings on the north side of the cathedral start to accrete onto the cathedral itself – you can’t tell where one ends and the other begins. It actually is a complex.

We went through the gate at the west end of the cathedral precinct, looking for somewhere to sit and have lunch. This turned out to be the site of the martyrdom ofJohn Hooper, of whom I hadn’t heard before yesterday but now probably approve, and I got the distinct feeling Gloucester had stopped trying. The fronts of the houses that look onto the precinct are immaculate, but the back sides really are the backsides. It was like the precinct was mooning us. The rear of the precinct forms one side of a square of 60s or 70s houses and flats that could be in Milton Keynes for all their sense of history. Bit of a letdown.

But, nothing daunted. Outside, when it wasn’t raining I found a real seaside feel to the city, without a sea. Something in the air and light tells you you’re close to a large body of water, i.e. the River Severn. The calling of the seagulls adds to it. And so we went looking for the Historic Docks (which we knew to be Historic because the signs said so). These have been very nicely done up, either converting the old warehouses or adding new buildings in a recognisably related style. Mind you, actually go into the buildings and you enter Retail Hell – it’s a retail outlet centre, like Bicester Village, utterly dry and soulless until you step outside again. We went mad, drunk with retail intoxication, and bought some socks at Marks & Spencer. Oh yes, three years of marriage has taught us how to splurge.

And so home, and a delicious anniversary dinner at Kitsons, which is under new management that doesn’t yet have a credit rating and so only takes cash or cheques. But, as the waitress helpfully pointed out before forgetting to bring the bread I ordered, there’s a Nationwide with a cashpoint opposite.

Tentative plans are now being drawn up for a raid on Worcester (after which we will have done the Three Choirs without any of that tedious singing stuff); or even for a long weekend taking in Worcester and Tewkesbury. Watch this space.