Tuesday 4 August
So, today I walked up a mountain, technically. Which mountain? Why, the one in the middle of Montreal, of course. The eponymous Mont Royal, that gave its name to the city, Why? Because it’s there, you fool. Tcha, the questions you ask.

According to the Rough Guide, Mont Royal is only 233m high, which is why I say ‘technically’. It’s heavily wooded and lightly landscaped by the same guy who did Central park in New York. There he started with a blank slate – the park was literally blasted out of the ground. Here he had to work with the fact that there was a 233m bump in the way. The Parc du Mont-Royal still has a Central Park-ish effect, with artfully placed lumps of fractured rock and excitingly curvy paths that meander off into the undergrowth. If it’s fake nature, it’s very convincing (again, like Central Park). I took the Rough Guide’s recommended approach which is an hour-long stroll up a wide gravelled drive, made for horse-drawn carriages, that twists and turns and gets you to the top so gently you hardly notice the slope. There are several tops to choose from but only one for me, (a) because it’s the obvious destination of the route I took and (b) because Bruce Willis and Matthew Perry have a scene there in The Whole Nine Yards. It’s a semi-circular plaza with a fantastic view out over downtown. 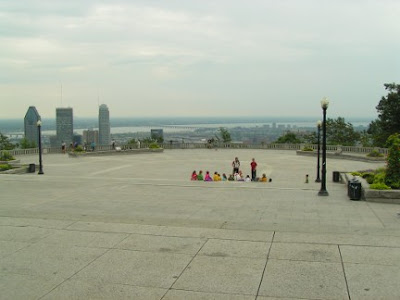 On the way up I passed a group of about twenty youngish mums, all in sports wear, pushing their babies in buggies and exercising according to shouted commands from the buggycise mistress. A nice way of combining the demands of motherhood and the needs of the self, I thought, even the bits where they had to wave their hands over their heads and let the buggies continue to roll through momentum. Actually it was only one hand at a time but momentum still played slightly more of a part than I would have liked if I was one of the dads. 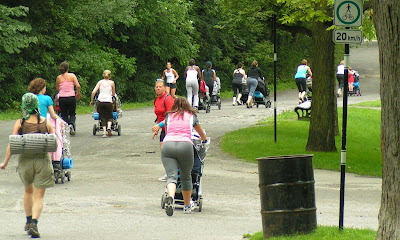 Then down to downtown, which seems generally like a North American city. I’ll look at Vieux Montreal tomorrow. Why do American cities all have such ugly pavements? They are just white-grey concrete slabs, not even with cracks to avoid walking on. Boring. But, as predicted, downtown Montreal has way more life and zing to it than Denver. Many restaurants have the nicely European habit of opening up the entire shop front to the pavement, so diners can enjoy the natural air conditioning (always nicer than artificial) as they eat.

I’ll spare you photos of the churches visited – the Basilique-Cathédrale Marie-Reine-du-Monde (a scaled down copy of St Peter’s) and the Anglican cathedral, the most boring cathedral in the world EVER. They didn’t even try. They asked themselves: what kind of cathedrals are there in the Old World? Um … oldish looking ones. Okay, we’ll fake an oldish-looking cathedral. Style? Perpendicular? Gothic? Italianate? Norman? No, just … oldish-looking.

However, had I been here in the mid eighties I wouldn’t fail to show you a photo of the cathedral on stilts. They decided they wanted to build an underground shopping mall beneath it. So, they cut away the ground and left the cathedral standing. On stilts. There are photos of it on display and it’s surreal. The mall is now there, of course, and very handily included somewhere I could buy a decent towel. I decided I couldn’t face another six mornings of drying myself with the handkerchief-sized scrap of cloth that passes muster for a towel at UQAM. It was obviously based on the same physical ideals that inform their notion of what makes a double bed. Everyone I’ve seen so far looks normal sized (or American) but there must be a colony of right titches somewhere.

As far as I’m aware the Canadians don’t kick up too much of a fuss about being subjects of Her Majesty the Queen. Maybe they leave the republican sentiments to the pigeons. 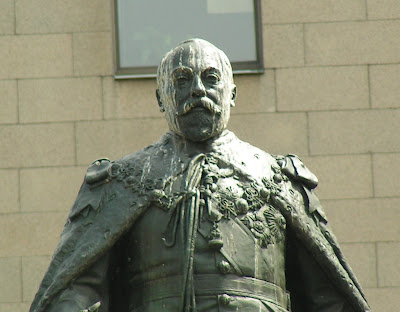