Wednesday 5 August
Vieux-Montreal is where it’s at. Cobbled, winding streets that could almost be European – admittedly with a slight bias towards gift shops selling amusingly captioned t-shirts and maple syrup. The best and longest of these is Rue Saint-Paul, which winds because the shops on its south side used to back directly onto the St Lawrence River. The backs are still marked with the names of the shops of old, for the benefit of the boatmen, though now there is 100m of reclaimed land between them and the nearest water, which makes a fantastic promenade when the sun is bright and the wind is off the river – as it was today. 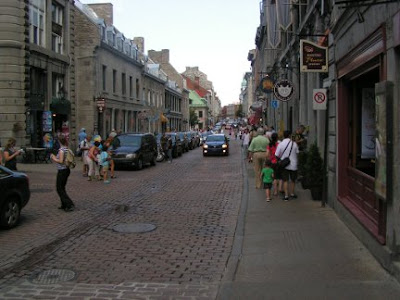 Thirty five dollars gets you an amphibious tour of the backstreets of the old quarter, followed by a plunge into the river and a chug along the waterfront. 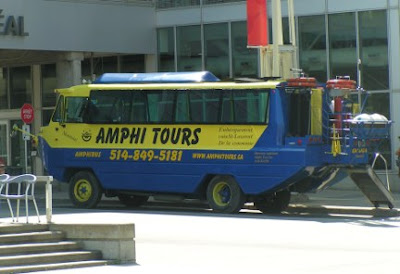 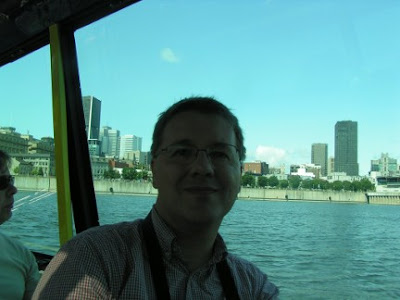 Interesting fact of the day, unless the guide was winding us up (as when he told a tourist that the tyres hanging alongside all the quays were taken from amphibious buses attacked by great white sharks): local law says that no building in Montreal may be taller than the top of the cross on top of Mont-Royal. The tallest skyscraper downtown is 15cm shorter.

Opposite all this loveliness, the other side of the water – the quite astonishingly ugly Habitat 67, built for an Exposition back when the point of expositions was to date the event firmly with a style that could never be replicated in any other year. Logan’s Runshould have been filmed here. 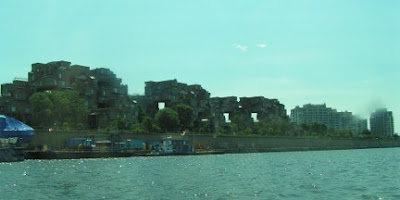 Wandering around on my own afterwards, I wondered if the Centre des Sciences de Montreal named its café deliberately, or if it finds it a bit of a hard sell and wonders why. 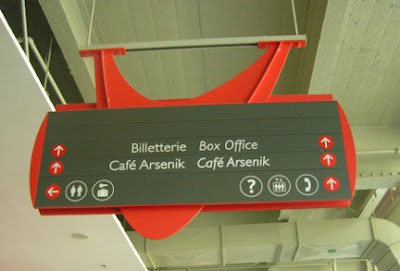 Never mind yesterday’s basilica and sorry apology for an Anglican cathedral – Vieux-Montreal has the churches worth looking at. The chapel of Notre-Dame-de-Bon-Secours is worthy of note for several reasons: its ministry to many different groups (plague victims, sailors, women); its age (the basement contains the foundations of the original stone chapel dating from the 1650s); and the story of its founder, Marguerite Bourgeoys. She came over in 1653 to start the first school but decided what the old place really needed was a church, which she pushed through despite opposition from the priests. Which raises the question of what the priests were doing there in the first place, but perhaps they thought keeping the uppity women in their places was far more important in the eyes of Heaven than, you know, preaching the good word and helping the poor and all that.

Two things I enjoyed about our guide. One was his Franco-American accent, pronouncing ‘epidemic’ with the same emphases you would put on ‘academy’ and ‘hypothesis’ as ‘hypo-thézus’. The other was his candour. When asked if the chapel converted many natives: “No, no, no, no, no. They killed them all off. Different strategy.”

You can also go up the tower of the chapel for some excellent views of the waterfront.

Over to the other end of the old quarter you get the Basilique Notre-Dame de Montreal, and for the first time I can say that the interior of a church took my breath away. It is astonishingly beautiful – and I say astonishing because it isn’t a slavish copy of European originals but done in a wood-intensive style I’ve not seen before anywhere else. 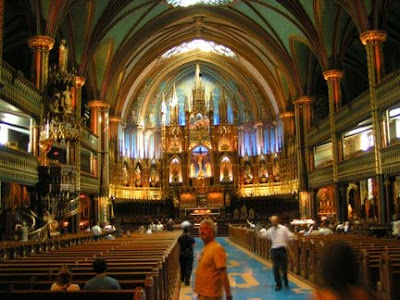 Despite that, I have to say that by now I was getting a little churched and Catholiced out so I didn’t linger. If you’ve noticed a certain Marian emphasis to the whole place – well, apparently the original settlement was dedicated to Mary and was originally named Ville-Marie. That would explain it. I still wonder what Mary makes of it. As a good Protestant I’m sure she hands over the bundles of prayers she receives every day to the appropriate authority, and feels rather embarrassed about it.

“Sorry, they’re still at it, praying to me rather than you. I mean, if they work for a company, do they direct requests to their CEO or their CEO’s mother?”

“I know, hurts, doesn’t it? But their hearts are in the right place so they’ll still be welcome up here.”

“Still, I can’t wait to see their faces when they learn Luther was right …”

Oh, and speaking of ugly (as I was) I tracked down the Palais des Congrès, where the whole point of the visit starts tomorrow. 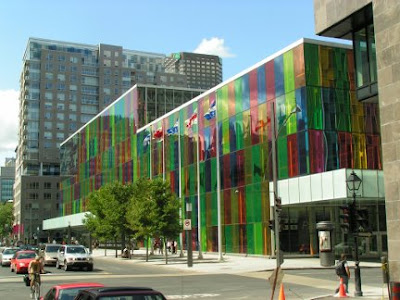