Tuesday 4 August
That was a rather throwaway reference yesterday, so some clarification might be in order. I have a room and a bed and a table and chair; I have an en suite bathroom with shower, sink and toilet (no extractor fan or plug); I have a small cooking unit and fridge which would be handy if I had anything to cook or keep cool; and I have the possibility of Internet access. I do not have TV or air conditioning. I do, though, have a ceiling fan, which with the road noise means I need ear plugs to sleep. It’s a busy main road out there, the old boulevard René-Lévesque Est. 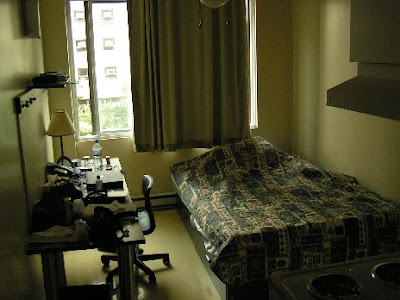 The room is officially “studio with double bed”. Right … Well, the bed is comfortable enough. The mattress is a foam block wrapped in plastic, reminding me of the jump mat from long ago school athletics. Two thirds of it are a solid block, and one third of it is a zipped-on slightly narrower block. Presumably that officially transforms it from single to double by some strange quirk of Franco-Canadian mathematics, which is so much superior to the Anglo type that I learnt at school. 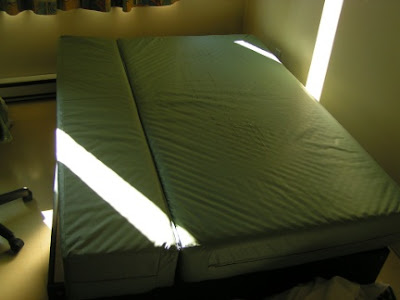 If I lie on it, my ankles dangle over the end. Fair enough, I’m used to that. If I hold my arms out, and my left hand is just on the edge of the bed, my right elbow goes past the opposite edge. So, if that’s a double, Montrealeans are either very small or sleep in multi-story mode rather than the more traditional side by side.

And the sheets aren’t quite wide enough to tuck in by more than about a centimetre on all sides, and the friction of sheet-on-plastic-mattress is minimal. So, no matter how carefully you turn over, you will end up lying on a thin ribbon of rumpled sheet beneath you. Maybe that’s why it’s considered a double, because you actually need two of you to counter-rotate.

Anyway. I slept. And so to see what Montreal has to offer.