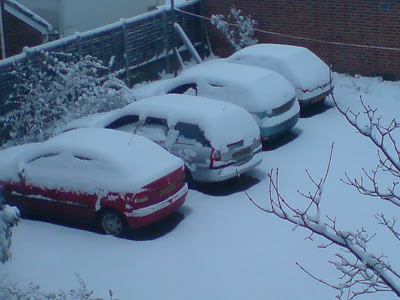 Management at work are currently considering whether to declare a BCP scenario. Lovely as it would be to think this means they will whip out a 1662 Book of Common Prayer and see what it says about the weather, it means the Business Continuity Plan will come into effect. After an hour’s journey in and a cup of coffee, and with full managerial approval, I pre-empted it by coming home anyway.

Earlier on, Bonusbarn escorted me to my car, frolicking in the virgin snow like a little lamb and helping me on my way with snowballs, bless him. I left him stewing with the possibility that school might still be open. It’s a hardy place. The last time we had snow, every other school in town closed except his; they let everyone get in, then sent them home again at 11. This time they saved him a journey by announcing that sixth form lessons were cancelled; no excuse for everyone else. So he’s happy.

The roads were slushy but passable, and very slow due to careful drivers. There’s a certain solidarity amongst snow drivers; an esprit de corps, a knowledge that we’re all brothers and sisters. Unless you’re the driver of a 4×4 Chelsea tractor that broke down in the left-hand lane halfway up Steventon Hill, flashers on and blocking off traffic to Didcot. Stuff the esprit de corps, you’re allowed to find that hilariously funny, unless of course you’re one of the drivers behind it. But as it happens, I go up the right-hand lane of Steventon Hill, so that’s okay.

Coming home, I came down the A34 which had no problems at all, and I saw The Snowplough. It appears to be the only one in existence in the UK, and I saw it. Ploughing snow. I feel fulfilled.

Now to get down to the work I brought home on a stick, relishing the chance to do it on a PC.