If the Chief Technology Officer is going to send an email to everyone saying “stay at home”, he really should do it earlier than 8.32, a time at which on a normal day almost everyone is at their desks.

My own manager did try to phone me, but the call came as I was pulling out onto the main road and I don’t answer the phone while I’m driving. By the time I had slithered into work and seen the almost deserted carpark, I could guess what the voicemail she had left would say. 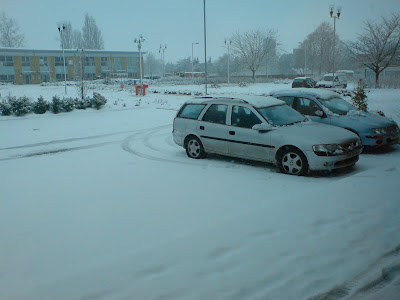 The roads were much less crowded than yesterday but also much more slippery, cancelling out the advantage. To be honest I only pressed on to work because I had seen the queue of traffic heading in the other direction. Still, having got there I was able to give a colleague a lift back to Abingdon, to catch any bus that might be heading for Oxford, so I felt warm and fulfilled.

Tonight’s recipe: gnocchi bolognese, hot and with lots of garlic. Perfect for the season, I think.