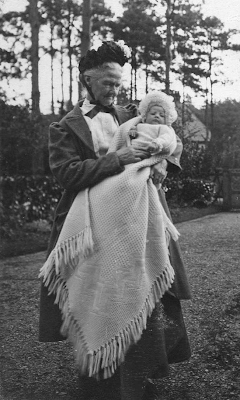 So, Nan lived to meet three directly descended great-grandchildren and enjoy being able to have conversations with a teenage step-great-grandchild. Somehow, being a great-Nan she became known among her youngest descendants as Nan the Great, and quite right too. She predated the Russian Revolution by 8 years and outlived the Soviet Union by 21. Her aunt once met someone who could remember seeing the fleet return from Trafalgar. Less than a fortnight before she was born, Blériot flew across the English Channel, and within three quarters of Nan’s total lifetime, Apollo 11 landed on the moon. Well into her seventies, she was jetting around the world herself.

Nan loved to socialise and to network. Even when she broke her leg in her nineties, it took just minutes to establish that she knew the mother of the ambulance lady. Her friends were all of a similar background and nature to her – impeccably upper middle class and by today’s standards very often quite dotty. 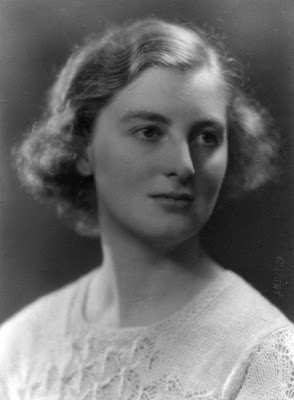 The family fortune was a memory but the breeding and manners lived on, combined with flashes of attitude from a bygone era. When hospitalised for a period a few years ago, she could still unblushingly refer to her doctor of Asian descent as a little brown man. (For the record she had often had people of similar ethnicity to stay as house guests.) Her idea of an ideal conversation was one that wittered on and on and on and preferably didn’t touch on anything at all that’s important. Any attempt to make it relevant or meaningful had to be resisted by dragging in yet another anecdote about someone no one but the speaker had ever heard of who did something utterly unimportant. I spent a lot of my prep school weekends with Nan; it may be why I find it very easy to stay silent and generally tune out if the point of a conversation isn’t at least looming on the long distance radar after about a minute.

But let me not for a minute do her down.

My grandfather spent most of World War 2 in the Far East fighting the Japanese and having a whale of a time. Nan’s memories of the war were always less rosy. His rather tactless letters back home were full of news about what fun he was having and very short of any share of the money he was earning to help keep his wife and child. So she crossed the Atlantic twice with her young daughter during the U-boat crisis, seeking a better life in Canada, not finding it and coming home again. Peacetime did nothing to reduce the long separations. She would have looked at today’s 6-month tours of duty in Afghanistan and laughed a hollow laugh. After the war she found herself having to raise a mentally handicapped son; and when Granddad had a stroke in the 1960s she had to look after him too. She can be forgiven some quirks.

The funeral was held yesterday, in the Trinity Chapel of Salisbury Cathedral, where she had spent many years as a guide: quite by coincidence it was 35 years to the day after her husband’s own send-off. It was the first decently sunny day for ages and the chapel, the pointy bit at the end of the building, is light and airy and full of space – the perfect setting. The music of the organ filled an almost empty cathedral, which has always looked good but at lunchtime on a term-time weekday looks absolutely stunning.

Nan’s first intimations of mortality began over a decade ago when my parents went to New Zealand for a few weeks and Nan became convinced she wouldn’t last until they got back. So, I was summoned to discuss her funeral arrangements with the then Vicar of the Close, who could barely keep a straight face at this obviously hale and hearty old lady convinced her time was nigh. All that really came away from that meeting was (a) no, she did not want “Candle in the Wind” and (b) I was to select and read a suitable Bible passage – she trusted my judgement and would be in no position to complain if she didn’t like it. We managed both of those stipulations, and the passage in question was 1 Thessalonians 4:13-18. Being able to say “We believe that Jesus died and rose again”, with your amplified voice echoing around a cathedral, is a powerful experience.

I also designed the order of service for the funeral, which she might just have understood as a concept; and I downloaded an MP3 of “The Road to the Isles” from Amazon to burn a CD to play at the Committal, which I would never have been able to explain to her in a thousand years. I mention all this because she was the one who set me on the path to computer literacy in the first place, by giving me the money for my 21st birthday with which I bought my first computer, my faithful and beloved Amstrad PCW. She was in tune with the modern world enough to ask me once to demonstrate ‘an internet’. I chose the National Rail website as most likely to be understood as something useful. I asked her to name a town. “Salisbury.” I asked her for another. “Portsmouth.” I asked for a date. “Tomorrow.” Click, click, click … And behold, I could show her that there was a train from Salisbury to Portsmouth at 10.30 the next day.

“Well, I knew that,” she said and thereby dismissed the Internet revolution from her consideration.

She might have enjoyed the slideshow at the reception afterwards: a PowerPoint montage of pictures that ran on a couple of laptops, showing photos of her from babe in arms to old lady in receipt of her telegram from the Queen (who looks almost equally grumpy in her picture). I had a brief crisis of conscience in assembling the pictures: should I include the arty one of her in her twenties, tastefully naked sitting on a rock by the sea (which really can’t have been very comfortable)? Tact won out over truth: besides, there were a lot of her contemporaries among the guests and I wouldn’t have wanted them on my conscience.

RIP, Nan, and I promise not to tune out when we meet again. 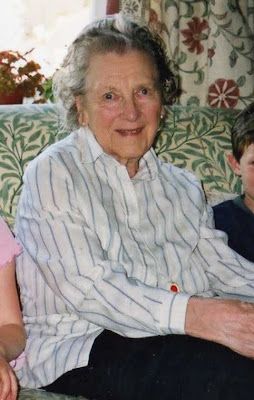 This is the modern equivalent of putting your kid’s work up on the fridge door.

I’ve never expected to be wanted for my body and especially not at a funeral, but so it came to pass yesterday. My two cousins, with a combined height of about 4 metres, wanted to bear their father’s coffin – but unless they did it all by themselves, this was going to present a problem, so they needed equally vertically gifted pallbearers to balance the load. As it was I was the only one they could find. The excellent undertakers, who can cope with practically anything, did what they could to even things out so the coffin was born in by me + senior cousin J (back), junior cousin R + tallest undertaker (getting a free ride) (middle) and two regulars at the front. There was a slight incline but nothing to worry about. You learn to walk like a duck so as not to kick the heels of the guy in front.

And what an honour it was. Afterwards I said I would try and reciprocate when the equivalent occasion comes up in our family, but that event might also include things like Union Jacks, guards of honour etc. so it might just be best to leave it to the professionals. They understood. Anyway, we’ll cross that one when we come to it.

It was a wonderful service at the Parish Church of All Saints Weston, full of love and happy memories for a life-loving man with a long and successful career. The readings – Robert Louis Stevenson and Ecclesiastes 3.1-13 – summed him up perfectly; my cousins kept their brimming emotions contained in their tributes in a way I’m really not sure I could match; and the Revd Fred Harte did wonders with bringing the Christian message of hope to a not particularly religious congregation, without issuing an altar call or invitations to Alpha.

Then to Putney Vale crematorium, which has seen off most of that side of the family over the last 30 years or so. The coffin moved off to Bunk Johnson’s “Walk through the streets of the city”, an exciting bit of New Orleans jazz I’ve not heard before. We were then expected to leave to the sound of Roxy Music’s “Avalon”, except that when the undertakers opened the door next to the sound console they knocked something and the music switched back from soppy 80s crooning to New Orleans jazz again. Would that all Bryan Ferry’s works went the same way. If (and it’s a big “if”) I must have Roxy Music at my funeral, please make it something like “Love is the drug” or “Do the Strand“.

Then home, to find that Bonusbarn had eaten the last pizza, so we did what we very rarely do and went out and bought fish and chips. And, still feeling keyed up from a long day, washed it down with a brandy. Extravagance! But fully in the spirit of the closing verses from the reading.

My father shared a memory that I wasn’t going to mention to my cousins but afterwards thought maybe I could have, because they joked that thanks to my uncle’s Eastenders connections, when the curtains closed over the coffin they could have played the famous intro drumbeat – duh, duh, duh-duh, duh, duh-duh-duh …

So anyway. On the occasion of one of my great aunts being sent off at Putney Vale, the furnaces were obviously going at full strength that day. There was the distinct smell of smoke and bits in the air and it really was unpleasant. My uncle took a deep breath and remarked, “Ah, ze ovens are vorking vell today!”

He was bombed out by the Luftwaffe as a boy. He’s allowed to say things like that.

He will be missed.