“I’m off. I’ve left the dehumidifer running in the bathroom.”

[Exasperated teenage sigh.] “You know, it’s never going to dry out the bathroom completely because the toilet’s full of water.”

“Didn’t you notice that mum had repainted the wall?”

“Did you think it had just healed?”

“By the grace of God, strange things can happen even to walls …” 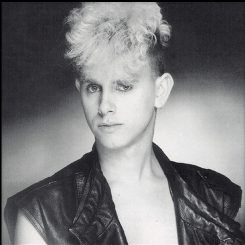 It is of course Martin Gore of Depeche Mode, c. 1981. But since Bonusbarn’s new haircut, there is a distinct similarity, and I have had “Just can’t get enough” going round in my head for the last couple of hours. Drat the child.

If either of us makes it to our 50th wedding anniversary we will be in our nineties. My parents are a little younger but then they started earlier. Still, 50 years, eh? The oldest friends I am still in touch with, I will have known for 31 years this September – I met them upon starting at a new school in September 1978. That’s still not 50.

So, a weekend given over to due celebration of the Big Gold, and quite right too, in far better weather than we had any right to hope for. Mostly shirtsleeve order, with just the occasional sprinkling of a few molecules of water to remind us we were having the weather by special dispensation of grace only.

Saturday saw two dozen friends and family converging on the parental home, the criterion for non-family being that they (or at least a spousal partner) had to have been at the wedding itself. I asked one of the former bridesmaids if she was retired now.

Well, okay, point taken but she was quite a young bridesmaid.

The one of my father’s close army pals who isn’t one of my godfathers, i.e. the one who became a multi-millionaire, remarked that he had been married for a total of 45 years. “To four different women, of course …”

As well as hundredth birthdays, the Queen will apparently send congratulations to long-lasting couples … but only starting at the 60th anniversary, so the Aged Ps will have to stick with each other for a while longer.

For Sunday we (family only) gatecrashed what used to be my grandmother’s local church and was the one where the ceremony had taken place, 50 years and 24 hours earlier. I’m delighted to see it now has a lady vicar and what looks like a really thriving all-age congregation, and all that without going all ghastly and modern. Good on them.

It’s a very pictureskew little village south of Salisbury but I had always thought of it as a rather staid retirement community. In my thirties, to my surprise, I met a retired Spitfire pilot who during the War had been shot down by Adolf Galland. Blimey, someone interesting! Where had he been all my life?

And yesterday I had someone pointed out to me: “He designed part of the Eurofighter …”

And in my grandmother’s former local, where we had lunch, there was a poster with photo in support of the village’s team entry into the Spire FM Naked Gardener competition. (Apparently they won, too.)

Eurofighter gent also drew my attention to the legend inscribed around the pulpit: “I have a message from God unto thee.” Even though I spent probably about half my Sunday mornings between the ages of 8-13 in that church, and many more before and after, I had never really noticed it and it would certainly never have occurred to me to look it up. Now I was gleefully told it is from Judges 3:

“… And Ehud said, I have a message from God unto thee. And he arose out of his seat.
21And Ehud put forth his left hand, and took the dagger from his right thigh, and thrust it into his belly:
22And the haft also went in after the blade; and the fat closed upon the blade, so that he could not draw the dagger out of his belly; and the dirt came out.”

There’s lovely. I hope that’s the kind of Bible reading they still do in their Sunday School.