Last year Best Beloved was watching a programme about Henri Matisse, learned of the existence of the Chapelle du Rosaire in Vence, and fell in love with it. At that point it became an intended holiday destination.
It’s attached to a convent of Dominican sisters, which takes visitors, so we did consider staying and I was rather looking forward to the conversation: “so where are you going on holiday, Ben?” / “Oh, I’m going to stay in a convent …”
But no, we went for a more conventional hotel and it was probably the right choice.
Vence is a half hour drive north of Nice. Nice is built on the one flat bit of the Alpes Maritimes, which as the name suggests is otherwise quite hilly. You don’t go far inland before awesomely steep hills and cliffs start arising all around you, verdant and with homes clinging to them until they get so steep people stop trying. Most of Vence is on the top of one of these, spilling down on either side, and to the north it looks across a valley dominated by the Baous – immense, imposing cliffy peaks. At night the valley rings with what at first I thought was a crowd of laryngitic cicadas but eventually realised – no jokes, please – must have been hundreds if not thousands of frogs. The chapel is on the north side of this valley, looking back at the main town. 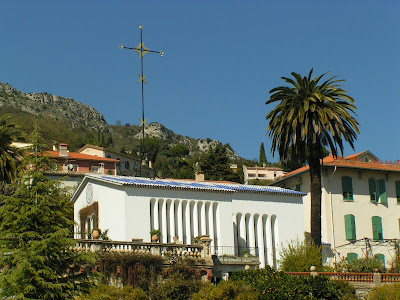 No photos allowed inside, sadly, so I’ll have to describe it. It’s very simple, and elegant in its simplicity. Not large – a total seating capacity of maybe 50 or so. The floor is paved in white stone, the walls and ceiling are painted white, and even the Matisse drawings (of which more later) are done in simple black strokes on white tiles. The building is L-shaped with the congregation sitting in the longer part and the sisters in the bit around the corner. The altar sits on a dais at an angle to catch both wings of the chapel. You may roll your eyes when I say it reminded me a little of the TARDIS console, classic design, the focal point that quietly presides over the white space around it – but I mean that as praise, honest.
At the end of the chapel behind it, and also on the congregation’s left, tall, thin floor-to-ceiling windows are paned in regular patterns of blue and yellow – very Swedish – which cast a beautiful hue on the white floor and walls. They are exactly the right colours to splash around the cool interior: even when it’s well over 30 degrees outside, you feel cool just looking at the colours.
(An alternative design Matisse considered, of which a mock-up can be seen in the museum, had much more autumnal colours of orange and black and gold. It would have been effective but also incongruous when you knew that outside was actually a nicely sunny Provencal day. Maybe if the chapel had been further north in France.)
There are three large line drawings by Matisse in Good News Bible sort of style: a tall robed figure who is St Dominic to the right of the altar (Dominicans, remember), a Madonna and Child with arms outstretched to the right of the congregation, and the stations of the Cross on the rear wall.
It’s only open at certain times of day and you want to be there right at the opening. There were already about 30 people waiting when we turned up. A brief talk by one of the sisters and then you’re ushered out for the next lot. By the time we emerged, coaches had started pulling up outside.
And now I’ve said all that, it occurs to me there’s nothing to stop me scanning the postcards we bought. Top, looking towards the front; St Dominic and Madonna & Child on right. Bottom, towards the back with stations of the Cross.
More to follow. 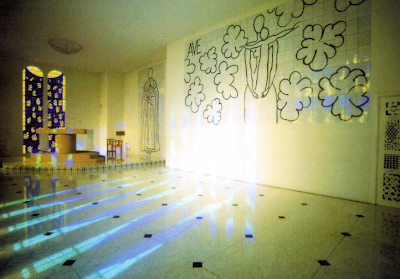 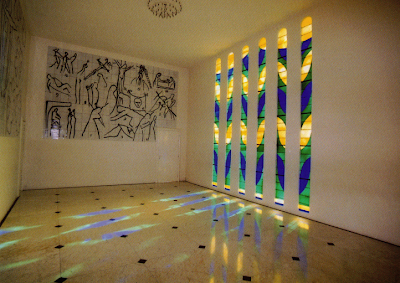