What do you mean, what is it?

It’s a JNT PAD. It says so on the front, in a font that looks suspiciously like Comic Sans, only that didn’t exist back when this baby was made.

JNT = the Joint Network Team, the group set up to research and ultimately implement a UK-wide computer network for research and education, which lives today as JANET. PAD = Packet Assembler / Disassembler – a device used to connect circuit-based computer terminals to a packet-switching network such as … oh, I dunno … the Internet.

In other words, this little gadget – well, I say little, it measures 21 x 27 x 46 cm – was quite important in the history of networking.

It could presumably connect 16 terminals to a network, judging by the connections on the back – plus, which makes it so sweet, in the top left corner, a socket for connecting a cassette facility. Bless! That was the point at which I actually wanted to hug it. 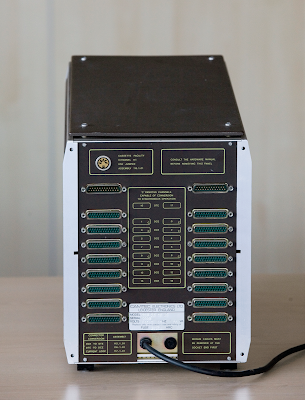 The JNT sponsored its development in 1980 and placed an initial market-glutting order of 50 with Camtec. A further impetuous (gasp) 85 were ordered in 1981. The mad, mad fools! It’ll never catch on.

Photos taken by friend and colleague Sue, who is available at reasonable costs for any respectable function requiring skilled photography.