Best Beloved remarked that this was like all the holidays we would have had if we had met earlier, had some kids of our own, done this more often … all the triumphs, all the mistakes, rolled into one.

“It’s a pint of Guinness holiday,” I agreed.

On the first night we had had our first Guinness in far too long: as the wisdom would have it, it’s a drink, a meal and a smoke all in one glass. Bonusbarn turned the offer down, his taste being corrupted by abominations such as chilling and widgets. If you can’t strain the Liffey silt through your teeth, I say, it’s not real Guinness.

Let’s not dwell on the mistakes … but okay, I will beat my breast a little. Despite having once seethed in frustration when a boneheaded head of family scheduled a holiday for the week my A level results arrived, guess what I did 26 years later? The only justification I can offer is that they were AS levels, not real A levels at all, utterly unnecessary make-work for the educational establishment with no real merit and therefore not on my mental radar. Well, yes, I can tell myself that but they do kind of matter to the present generation. And as it turned out, our resident member of the present generation did quite reasonably well, thank you for asking.

So, anyway. There is a lot to be said for a holiday where everyone drives on the left, speaks English and uses the same plugs. The Irish use a strange currency that I kept referring to as dollars (my first venture into the Eurozone), but even that you get used to. And, vide Best Beloved’s earlier remark, it really was our first family holiday to somewhere that wasn’t a family residence.

Dublin airport is an interesting mixture of what looks like a 1930s central building, an ugly concrete 70s (I would guess) terminal and some gleamy shiny brand new buildings that are in the process of being built, some already in operation. The area around Dublin airport looks like a roadwork, and a common sight around the countryside is a new motorway in the process of construction that is no longer being constructed.

The area around Dublin airport also contains the Hertz offices, which contain a silver-tongued employee called Karl who is skilled at the traditional Irish pastime of relieving the English of their money. This particular Englishmen wanted to treat the family (within the holiday budget) and so played the game. “We’ve got you an Avensis,” quoth Karl in a silvery manner, “… or would you like something nicer?”

The magic word was “Avensis”. If he had said something like “Mondeo” I would have left it at that, but I disliked the last hired Avensis (in Sweden) so much I was prepared to consider alternatives. Via a Range Rover, which was frighteningly big and I couldn’t work out how to make the automatic gears work, we finally settled on this modest little family runaround. 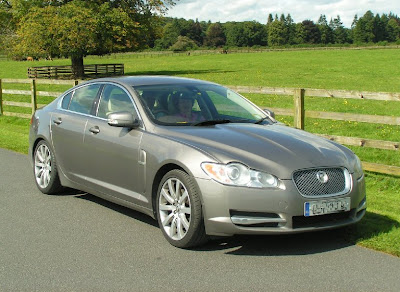 Well, it brought a smile to the family’s faces, though ‘wince’ might be a more accurate description for one of them. We all came to appreciate it: very handy the automatic gears were, for some of the windy, gear-intensive roads we ended up driving along, and the suspension could float over the more idiosyncratic Irish road surfaces. By the end of the second day we had worked out how to open the glove compartment and, more important, the petrol cap. It took another day after that to shake the feeling that I was driving around in a stolen car.

I would however list a few design faults: no rear wiper, difficult to look left and right (can’t lean forward because your head hits the windscreen, and thick side pillars block the view), and while the TARDIS console style pop-up gear selector dial is very fancy it’s one more thing that could potentially go wrong and anyway I like to put a car into gear, not dial it in.

So, Day 1, a 2.75 hour drive down to Kilkenny where one of Bonusbarn’s late dad’s best friends works as head chef in the 4-star Pembroke Hotel. Very nice. We tucked into his delicious baked Toulouse sausage and sauté potatoes, then stayed up when he came off shift and chatted, accompanied by the aforesaid Guinness and Jamesons and Irish coffee.

Day 2, a gentle stroll through Kilkenny in the morning before checking out. Kilkenny, and later Dublin, were to strike me as … well, I’m not sure of the word. “Varied?” Every shop is different. Instead of the dreary monotony of about six high street chains, every shop is something new. And packed, and thriving. It’s like an English high street from 30 years ago. This was when I started to love Ireland for more than just the scenery. (Update: further research suggests my view is a little rosy, not to mention uninformed and generally wrong. But I stand by the impression.)

But speaking of scenery, we then meandered through the countryside, includingMount Juliet and Tinakilly where Bonusbarn’s dad had worked, and back to Dublin, southside, to meet more friends who also happen to be Bonusbarn’s godparents. What they might have made of the physical manifestation of 17 years-worth of the occasional prayer, we didn’t ask. The nearby Sandyford industrial estate looks like photos you see of Dubai – amazingly ugly brand new futuristic buildings all at different stages of construction, but hopefully not facing Dubai’s credit problems.

Day 3, a drive through the stupendous Wicklow mountains in (somewhat unusually) brilliant sunshine, ending up at our lodgings for the new few days – Kiltale Holiday Homes, Co. Meath. A farm until a few years ago, the outbuildings have been converted into self-catering apartments. 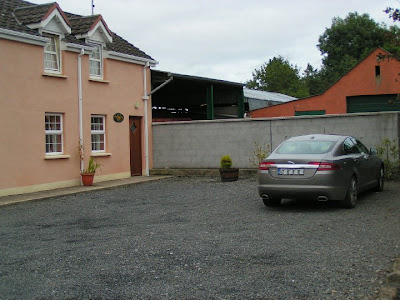 Highly recommended for a quiet break from it all, but not if (like one of our number) you have a hankering for the internet, or if you mind having to sit down to shave to get your face at the level of the mirror, or resent being woken by a loudly braying donkey at 6am. This was the scene of one of the fuller and more comprehensive exchanges of views that the three of us have known in three years of being a family, as tiredness + results frustration + the thought of three more days of sight-seeing + internet deprivation + delayed bereavement grief all combined into a perfect storm of teenage misery. I began to wonder if this would be the Holiday from Hell. I’ve never had one of those and the writer in me was wondering what it would be like.

With that out of the way, however, we moved on to Day 4 and more traditionally Irish weather … 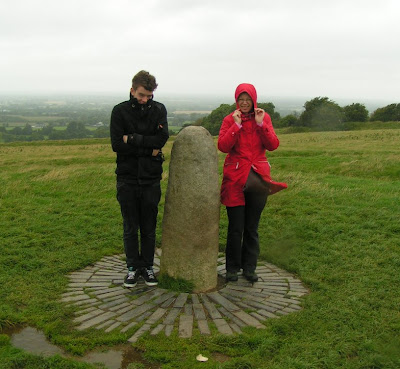 … as we went Neolithic, taking in the Hill of Tara, the Neolithic mounds of Knowthand other such venues. Towards the end of Knowth, Ireland decided it was No More Mister Nice Guy and it rained on us. Oh, did it ever rain on us, as in, soaked through to the underwear. The general adversity did much to lift Bonusbarn’s spirits.

Day 5: lunch with another old family friend at Roly’s (Dublin’s Herbert Park, opposite the US embassy) and then Day 6: Dublin itself. Ireland repented a little to give us another day of glorious sunshine to explore its capital, and what a splendid capital it is. The traffic would drive me mad if I had to live there and the suburbs are a warren, but the centre features these marvellous wide open Georgian boulevards along the Liffey. The English built this feature of Dublin, I mused, so why the heck couldn’t we have made London just as nice? Our loss, their gain. We bought fish and chips from Leo Burdocks, following in the footsteps (the sign said) of such luminaries as U2, William Shatner and the parents of Justin Timberlake, and ate them in the park next to St Patrick’s cathedral. 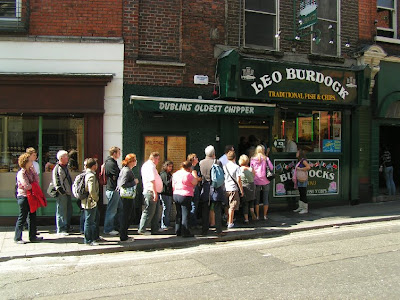 Then we wandered through the city centre. See above comments. Bonusbarn cashed a postal order at the GPO and I wondered what fool, and I mean fool, would try and hold such a wide-open place as a fortress; and then on to Trinity to marvel, and I mean marvel, at the Book of Kells. Try doing that in Adobe Illustrator. We could even make out some of the text: ‘non habeamus’ and ‘panem’ and ‘pisces’, from which Best Beloved correctly deduced we were looking at the Feeding of the Five Thousand. (I had already glanced at the printed tab next to it …)

Then finally Day 7, weather back to normal as we cruised in an anticlockwise circle to the north west, taking in such sights as the cairns of Loughcrew and the more recent but equally historic houses where Best Beloved first worked after leaving Sweden. Loughcrew is quite off the beaten track, but I was delighted to learn that the Office of Public Works pays an ex-farmer to sit at the top of a windswept hill and talk about the mound to any strangers as may turn up. 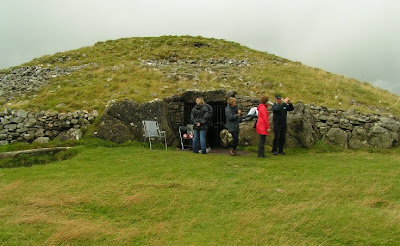 Returning home included the minor inconveniences of yours truly dropping our boarding passes somewhere in the airport terminal, and having to seek out a computer terminal and reprint them (Ryanair’s DIY check-in policy is a mixed blessing), and then remembering to use the gear stick again as we drew out of Birmingham International. And here we are. The End.

But in all seven days we only had that one pint of Guinness, so we’re going back.