Friday 7 August
The first morning walk of the con – a concept carried over from last year, therefore now in its second year, so it must be a tradition. We assembled by the fountain next to the Palais … 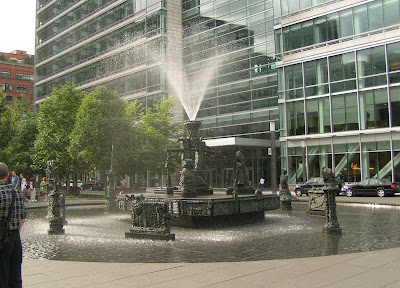 … which every now and then excitingly starts to steam. It seems to be a design feature and not a faulty valve. 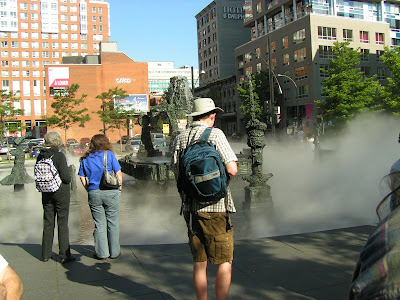 Then a nice stroll around Vieux-Montreal. I got chatting to one Colin Harvey, mostly because his badge identified him as coming from Keynsham, which I always confuse with Eynsham and so thought he was relatively local to me. A serendipitous error. With my usual memory for names I had completely forgotten he’s the editor of Future Bristol, review by me appearing in a forthcoming Vector – though I’m glad to say it’s favourable. He’s also an Angry Robot author and invited me to the launch tonight.

First must-see event of the day was the Golden Duck Awards, which were obviously not invented by someone familiar with cricket. They’re a bundle of different awards for younger readers under one title. The Eleanor Cameron Award for Middle Grades went to Lighter Than Air by Henry Melton and the Hal Clement Award was tie with a title I forget and Little Brother by Cory Doctorow. After the awards were given this turned (unexpectedly, but hey) into a panel discussion with all the authors present on writing for teens. This in turn got a little side-tracked with the specific discussion of how much sex you can get away with, but again, hey. And I got to tell Cory about how I once got a speed ticket on his behalf.

The Angry Robot awards in the evening were fun – a not too crowded hotel suite, for a blessed change, and a variety of wine. On the 28th floor of the Delta Hotel, a woman was observed freaking out because CBC News had just announced to the nation that the 28th floor was the party floor. Fortunately Angry Robot was on the 22nd. Anyway, I thought that if all the various bid parties stationed runners in the lobby to catch the hordes as they came in, they could make a killing.

Didn’t get to see the carnage, though, because at 9pm I was on “Just A Minute” back in the Palais, with Tom Galloway, Steve Green and Dave Clements, Nicholas Parsonsed by Paul Cornell. Maybe I’d had a bit too much wine, maybe my reactions are slow: for whatever reason I floundered a little even on subjects like Narnia and Gerry Anderson, before rallying disgracefully on Servants of the Wankh. My fourth place was made a bit more respectable with the help of my competitors. (Beep. “He needs the points.” Beep. “I agree.”)

Said subject had also been a title in the previous night’s charades, which I didn’t get to. Hint for anyone doing this in the future: you can get a similar effect with Obi-wan Kenobi.