Saturday 8 August
A day of unexpected highlights from items I wasn’t too sure about.

Patrick Rothfuss, Brandon Sanderson, Nalo Hopkinson, Doselle Young and me did a panel on “Archetypes and Stereotypes”, exploring the fine lines that distinguish them and also working out where “cliché” fits into the equation. And I don’t know how well we satisfied the audience but it was great fun – a lot of laughing and also a few good points made, though I say it myself. One lady afterwards told me it was the best panel yet, and this guy would seem to concur.

Then there was the signing, at which several people I didn’t already know produced copies of The New World Order and The Xenocide Mission and of course Time’s Chariot. 3/4 ain’t bad. 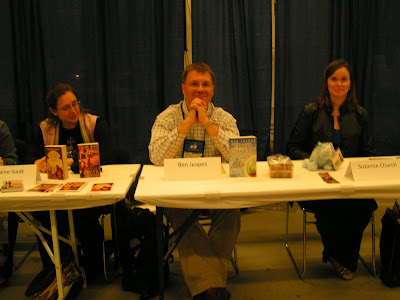 The one I really didn’t have high hopes for was “Size does matter” – a panel discussion on small presses. 8pm on a Saturday night, most people can think of better things to be doing, especially when it’s scheduled against the Masquerade. I had an invitation to the launch of ChiZine, which essentially said “we’re delighted to see you’re on a panel about the virtues of small presses: please come to our party to celebrate the launch of our small press which is scheduled right against your panel on the virtues of small presses.” Do you begin to see the flaw?

But anyway, the audience eventually outnumbered the panel and the proceedings unexpectedly became pretty well a monologue by Ron Drummond on what sounds like a breathtakingly beautiful museum edition of John Crowley’s Little, Big, to mark its 25th anniversary. Not quite bound in silver-engraved handtooled unborn calfskin but getting there. January 2010, people.