I have a Google Alert set for my own name (there, I said it) which usually just provides a daily summary of eBay links to my books. Until yesterday:

“They’re talking about me in St Tropez?” I thought. Strangely … no. 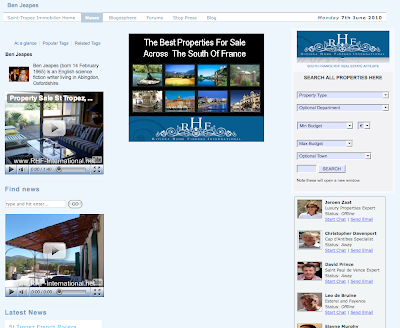 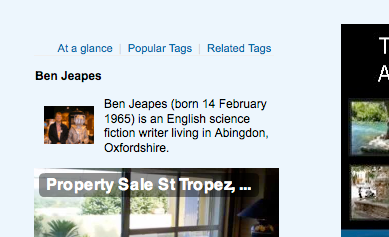 What you get is page with the opening blurb from my Wikipedia page (yup, got one of those too) followed by a lot of guff about finding property in St Tropez. You can see from the URL that this is a specific web page named after me. So, someone – or more accurately, I suspect, something – has created it.

I would guess, without too much thought, that a hapless webbot roams Wikipedia, picking out the entries of individual people and creating a St Tropez page for them. At least, that was initial theory. However, that would suggest there must be a lot of them and when I did a web search based on this hunch I could only find one other Wikipedia entry that has had the same treatment: 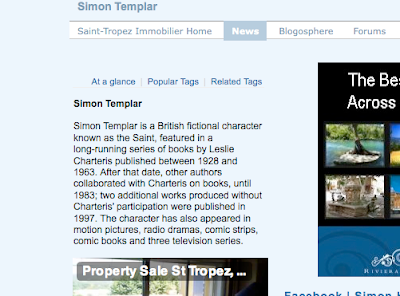 Yes indeed, if my theory is true then the two people with Wikipedia entries judged most worthy of this treatment by our friend the webbot are Ben Jeapes and the Saint. To be quite honest, the bot may be out of a job soon.

Alternatively, I suppose it could be the work of a fan with similar taste to mine: I mean, I’m a fan of Ben Jeapes and Simon Templar, so why shouldn’t someone else be? The test of this theory will be whether pages like this appear dedicated to C.S. Lewis, Arthur C. Clarke, Miles Vorkosigan, Terry Pratchett, the Doctor, Rumpole …

I hope it’s the George Sanders Saint because he was the best.

I suppose a peril of moving in primarily IT literate circles is that you forget how many illiterates there are out there: not necessarily in terms of grammar and the ability to construct coherent sentences (though to be honest, there is quite a close correlation) but just in terms of etiquette.

2) I was hoping we could use your ‘scribing’ talent for our website.

The Best Shows Youre Not Watching (dot) com [all one word]
‘Torchwood’one of our featured shows. We’re hoping to round up a few people who can occasionally contribute perspective (via an article/blog) on the shows – maybe a recent episode, future direction, plot shortcomings etc.

What’s in it for you?
Primarily a larger audience back channeled to your blog. We don’t pay but the site has a lot of promise and we’re pretty excited about getting it off the ground. Let me know what you think.

[I redact the URL because I’ve already given the name of their site and have no intention of making life too easy.]

Intriguing, because while I could swear I’ve mentioned Torchwood more than once, a search on the blog only uncovers one article, written nearly three years ago when the series began. Anyway. To save you looking it up, I devastatingly replied:

First, convince me you really are after my scribing talent as a result of a personal evaluation of my ability as evidenced on this blog, and that this isn’t an automatic spam generated by a bot searching on the word “Torchwood”.

1. The only article I’ve written on Torchwood is nearly 3 years old.

2. There’s a clearly visible link in the left hand column saying “contact Ben”, and yet you drop a comment into a totally unrelated post. The nicest word that comes to mind is “lazy”.

How you go about this convincing of me I leave up to you, but the clue is in point 2 above.

It’s not just web spammers but any kind of direct marketing: the key word is clue, people. If you want people to take you seriously, show you have one. Honestly. Do you really, really think that this kind of so-obviously mass-produced, badly worded twaddle is going to convince us of anything, other than the fact that you so clearly haven’t gone through our site in a search for exactly the right ‘scribing’ talent to suit your needs? Put another way: is it really an advert for your site that it’s going to be ‘scribed’ by the kind of people who either write or respond to this kind of thing?

I thought I would test my theory that the commenter may not be 100% inspired by my personal brilliance. A quick search on key phrases of the comment shows:

And there are others, but I got bored.

Good grief, this is the kind of thing people were doing back when the web was young in the mid-nineties. I may even have done it myself, though I hope I didn’t. Is a whole new generation that doesn’t remember the mid-nineties now making the same mistake?

… is hidden on my official homepage, apparently, at least according to Gender Analyzer. This site takes a URL entered by you, the user, and (a) applies sophisticated semantic analytical techniques to work out the likely gender of the author or (b) takes a lucky guess with remarkable consistency.

I then tried it on the sites of various friends and it guessed them all correctly, except one, the most feminist of them all who comes across as 65% man. Snigger.