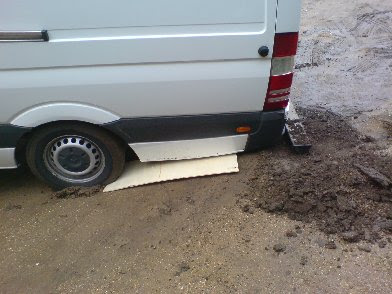 Take the biggest van you can find, try to make it turn round in a narrow parking space with lots of ups and down with quite sharp gradients in between, put a great big bar on the back of the van for no apparent reason, and … this is what happens. He tried to reverse and the bar was driven into the ground. He tried to drive forward and the bar anchored him where he was. The poor guy didn’t even want to be in our parking space. He was looking for the house 2 doors up the road, but his satnav – in fact, two separate satnavs – sent him up our drive. And there he stayed for the next half hour …

For once it was actually quite useful that there is a large skip outside the house full of junk, because it could be ransacked for stuff to put under the wheels. When the picture here was taken, the right side rear wheel was actually off the ground – the van was perched between two high bits of ground with the dip in between, with the rear solidly wedged in. We got him off, eventually, though it meant substantial excavation to free the bar (which he put back again before driving off).

We got chatting and I could relish the change of talking to a tradesman who speaks English rather than something more Slavic. He didn’t even want to be a van delivery man. He wanted to be a lumberjack tree surgeon, and indeed he was until being made redundant six months ago. Makes him handy with a shovel. Now he drives a van, with a very friendly young Staffordshire terrier for company. There are worse ways to make a living.

I hope the folk 2 doors down really appreciated their delivery.