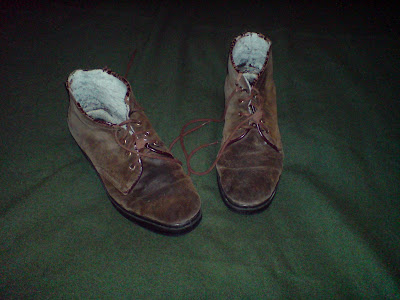 They look like something on the seabed picked out by the lights of a submersible, but these shoes have a story. I suppose any shoes you’ve owned for at least six years would accumulate experience but I like to think these ones are special.

I forget if I acquired them specifically for my first ever trip to the USA in 2002 but I know I was wearing them at the time. So, these shoes have traversed the North American continent. They have felt the waves of the Pacific slap the boards beneath them as they stood on Fisherman’s Wharf in San Francisco. They have trod the baking hot dirt of the Cahokia Mounds in Illinois. They have been up the Empire State Building and the Washington Monument, they have walked the length of the National Mall and they have stood in reverent silence before the giant statue of Abraham Lincoln in his Memorial.

They only survived this long by taking a cunning sideways step a few years ago into being my indoor shoes. They have a strange fleecy lining that stops them getting too warm in hot weather but keeps them nicely warm when it’s cold. Even so they really were getting past it and made the fundamental mistake of becoming uncomfortable to wear, due to the split soles on either side. Overconfidence, perhaps? So they have, with all due respect and ceremony, been consigned to the kitchen bin. I will probably never see them again. If I do, I’ll know something has gone badly wrong, probably in the kitchen.

I don’t know if it’s meaningful to tell a new pair of shoes that they must fill a big pair of, um, shoes, but that’s what I’d tell their replacements if I could and it was.