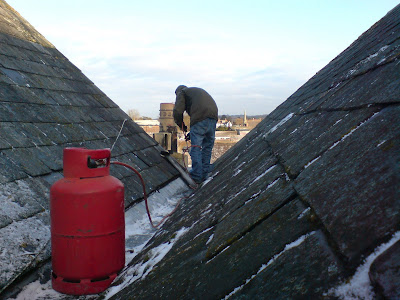 This is the man who has come to stop our roof leaking. It looks much scarier when you realise that he is standing beyond the gully of the two roofs, on a ledge that extends beyond the left-hand roof for about ten feet; and while the roof on the right extends to the end of the ledge, on his left there is a four-floor drop.
When he came to give us an estimate he calmly waltzed out onto the ledge, squatted down, checked the lead, stood up, pirouetted a couple of times, scratched himself and performed a quick interpretative dance to the tune of what I presume was the Czech national anthem. When he came today, lugging his flamethrower and associated gas tank, I expected him to get out onto the ledge by a series of backflips just to show that he can. Anyway, I was sufficiently convinced that this guy is used to working on roofs. It also helped that having seen the stains on the walls of the flat below, he could head straight for the site of the leaks and find the holes. Rather makes you wonder what the earlier cowboys did, doesn’t it?
So, all done and no more leaks. We hope.