I have fragmented knowledge of bits of Oxford. The Wycliffe area. St Giles. Broad Street, the High Street … I very rarely travel from one to the other, though. I make each one my destination for whatever purpose, and go there and back again. So, how do all those fragments fit together?

Park the car at Wycliffe. Along Norham Gardens and then down through the University Parks to the High Street, via St Cross Road – a handy back-alley route I didn’t know and the first of the threads to link the different bits together. Past Magdalen and over the bridge, hanging a left to St Clements and the Islamic Centre, looking suitably Islamic as it towers over the leafy green trees. 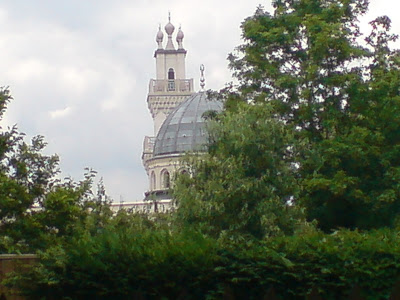 Then turn left just before the Magdalen Sports Ground and you’re in Mesopotamia – a shaded walk between two streams of the Cherwell, a mill stream and the natural channel, named with impeccably accurate Oxonian clever-gitness as Mesopotamia means “between rivers”. The walk is along a concrete causeway with overgrown banks on either side. You join at the point where the two streams merge again and the upper one pours down in a weir, so the air blowing at you down the alley is cool and moist. After that, though, you begin to see that it rained quite heavily earlier in the weekend – not a sign of it now, but it’s all evaporating and the air hemmed in by the overhanging undergrowth is humid.

You follow this as far as the point where the two streams diverge in the first place. The slipway with rollers at top left is presumably for getting punts between the two levels, but to my fevered imagination I could see it being an emergency punt launching device, for those occasions when the punt has to be in the water now. 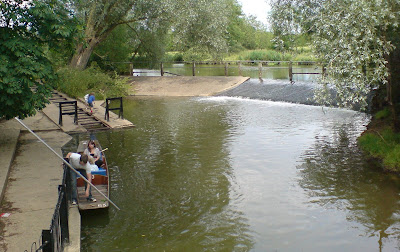 And then you’re back in the University Parks again, walking up the Cherwell, and a couple more fragments have been sewn together. But you’re only just starting the trip into terra incognita because now you cross the river again and strike out for points east, or Marston, whichever comes sooner. This is the flood plain of the Cherwell, completely flat, immaculate sports ground on one side and overgrown grazing-and-hay-making-meadow on the other. You cross fields and go down more leafy tracks, and even though it’s completely unknown you see things like the minarets and a cluster of trees in the middle of the sports ground and the roof of the JR – each line of sight a further thread to bind the whole. Then through Marston itself, deciding not to look at the inside of the 12th century church, round in a big anticlockwise circle via the Victoria Arms on the Cherwell, which you do decide to look inside. Oh, so that’s what this place is. I punted here on a company social once, but obviously I came by river. Anyway. Now you’re heading back down the Cherwell again and suddenly, presto, you’re back in the University Parks and on the way back to the car.

Then home, via Summertown and Wolvercote. A final binding thread around the top of the town.

Six miles, apart from the driving bit, according to the book of walks; lovely weather; and not one hayfevery sniffle. How a Sunday afternoon should be.