Two months ago it was an American convention centre the size of an airport. Yesterday it was a converted fishmarket in Northampton, just off the market square. The latter is much more fun for a convention. 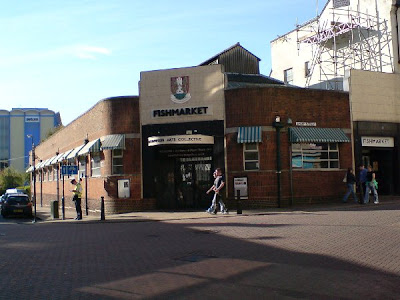 The Fishmarket has been converted into an arts venue by the council but retains its character. It’s an L-shaped building and both arms distinctly slope down towards the corner – a relic of the time when it had to be sluiced down at the end of each day to get rid of scales and guts. As an acoustic environment it is, um, challenging. Vast amounts of space above, in front of and behind you for speakers’ voices to get lost in. This was the initial layout for the panels, everyone facing lengthways down one of the long bits. 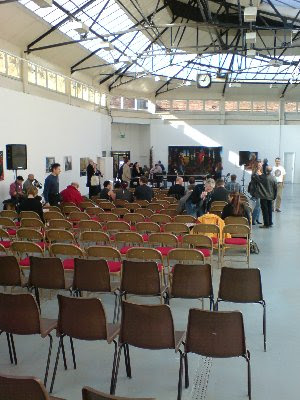 Thankfully, after the first panel they turned it 90 degrees so that the speakers had a wall behind them and everyone could sit a little closer to them.

The sloping floors aren’t the only remnant of the fishmarket past. At one end, where the book dealers dwelt, they still have the old marble topped counters. 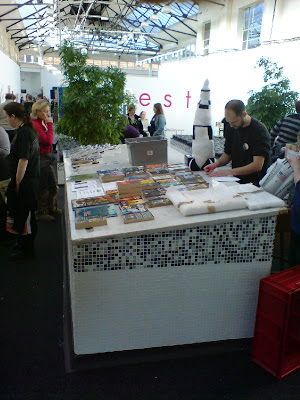 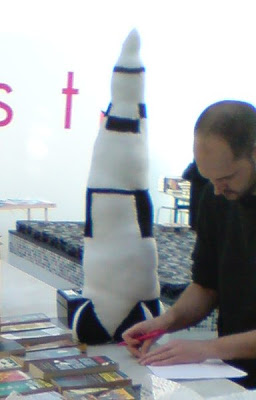 Master of ceremonies was Kevin the Jester, sometimes on stilts. 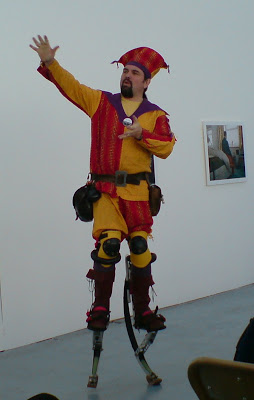 And the con? My favourite kind. Small scale, personable, interesting panel topics and a chance to meet and chat with everyone you want to. I counted a total of 7 people who had been at our wedding – 8 if you count young master Simon F, who is 18 months old now and was enwombed at the time. Guests of honour were Iain M. Banks, Ken MacLeod, Storm Constantine and Paul Cornell. Topics were on the usual range of subjects like which medium holds the future for science fiction, space opera, fantasy, yadda yadda yadda but for once I was getting a real feeling of the future being shaped as we spoke. Everyone was going home with a slightly firmer idea of where we all stand, which for a writer is no bad thing.

My sole public contribution was on the space opera panel (“Is ‘New Space Opera’ just ‘Old Space Opera’ in a fresh set of clothes?”) which I had a horrible feeling might turn into the Iain + Ken show plus three rabbits blinking in the headlights, a.k.a. Tony Ballantyne, Jaine Fenn and me. Ian Whates moderating. Shouldn’t have worried, as Ian moderated well and Iain and Ken are both pro enough and nice enough guys to spread it all about. At one point I said that one reason I didn’t write space opera any more was that I could no longer take the navies-in-space idea seriously, in this age when an airliner can take off from Heathrow and land the other side of the world without any necessary human intervention; interestingly, that sparked Iain into talking about his whole underlying philosophy for the General Systems Vehicles and other Culture craft, which I’d not heard before.

There was also my sort of dealers’ room – not books stretching as far as the eye can see, which actually can be counterproductive, but a few select ones including but not limited to Erik Arthur from Fantasy Centre with a wide range of good condition ex-review copies at £4 each. At least, that was who I gave most of my custom to. I’m one of those strange people who don’t usually come home laden with books but this time I made an exception.

Erik mentioned that a lot of customers my sort of age come in to buy old Steve Jackson Fighting Fantasy gamebooks. “I realised I don’t sell books,” he reflected. “I sell memories.”