Once upon a time – early to mid nineteenth century, from the available evidence – someone built a large four-storey out-of-townhouse on the far outskirts of Abingdon. It was an earlier, more innocent age. Smoke detectors and fire alarms hadn’t been invented and the only noticeable fire prevention systems were the tiled floors around the fireplaces that unexpectedly come to light when inhabitants redecorate and lift up the carpets for the first time. (I said innocent, not stupid.) 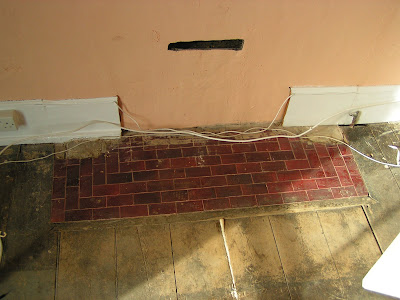 In the mid 1970s, the house was converted into flats, one per floor. This was also an earlier and more innocent age, and possibly a more stupid one too, because they still didn’t pay much attention to what would happen in the event of fire. The front doors off the flats were still the original doors off the hallway and landing and the only means of escape other than gravity was the central stairwell, so if that caught fire, that was your problem.
In 1991 a callow young 26-year-old moved into one of the flats, and as an owner became by default a member of the management company, but he hadn’t thought much about the deeper issues of life such as dying horribly in a fire and never even raised an eyebrow at the thought that he might be living in a deathtrap. And nor did the other owners.
‘Twas only in early 2010 that the young man, now a bit older and happily married and also the secretary of the management company, as the only owner-occupier left standing, was persuaded by his wife that installing battery powered smoke detectors from Homebase might add slightly to the overall happiness of the human race. They were duly installed. Meanwhile a new tenant had moved in to the top flat with her two daughters, and her ex-husband was a fireman. The fireman took one look at the building where his progeny were now dwelling and was … unimpressed.
The first the company secretary knew was when he received a call from the fire department to say that in response to “a complaint from a member of the public” (whose identity wasn’t too hard to guess: options, fireman ex-husband of neighbour, or casual passerby who surveyed the building from outside and thought “hmm, probably not safe”), he had been to visit the property and noticed the absence of smoke detectors. This was in June last year. As the detectors had been up since March, he either wasn’t very observant or had visited at least three months earlier and only just got round to issuing his report. This was finally followed up in September by a formal visit, suggesting the fire department themselves weren’t feeling the urgency. He agreed the battery smoke detectors were a good stop-gap but not enough. In November we (you’d guessed, hadn’t you?) received formal notification that:
To be on the safe side we both planed and planned the review date and in between other items like having jobs, having a life and so on, it all got done by the agreed cut-off point of 30 April 2011. And today we had our formal inspection, which must have taken at least 2 minutes, and I can proudly report that we are compliant!
Or as Bonusbarn puts it, if we all die in a fire now, we can claim on insurance. Well, quite.

Following on from last month’s fun that almost saw the accidental death of a meter man and the burning down of the property, they came back today to put right what once went wrong. To be fair it wasn’ t them that did it wrong originally, it was whoever wired this place up when the flats were converted in the 70s. But, damage had been caused and “as a gesture of goodwill” the meter men agreed to do all the remedial work on a no liability basis.

Well, okay, if you twist my arm.

For reasons lost in the mists of time, the meters are 10 feet up in the air behind hatches that hinge at the top. I’m sure it all made sense to the same people who thought it would be a wheeze to daisy chain the four neutral feeds in the first place. Advanced technology is needed to keep the hatches open while work goes on: any similarity to a long handled pair of clippers perched on top of a green box is purely coincidental.

I love hard work: I can watch it for hours, especially when it involves people doing open heart surgery on my home. All those wires, carefully disconnected, paired up and either reconnected or in some cases discarded (there was at least one completely redundant fusebox in there too, not to mention a large red switch marked NIGHT STORAGE HEATER, which none of us has) and made to work safely again. I may jest, but on the other hand if all the electricians and all the editors in the world suddenly vanished tomorrow, I know for a fact who would be missed first.
And because I was going to be in anyway, I thought it would be a good idea to book Dynorod in for the same day. An obstruction had been detected in the drains and they needed to put a camera down to have a look.
My thinking this was a good idea lasted until the man’s opening words: “do you have access to a power socket?” Biscuits. I assumed the equipment worked off batteries: as indeed it should, only the batteries had drained on his last job. Fortunately he was able to pick up a generator from a colleague and still do the required endoscopy. So now I know what the inside of our drains look like. 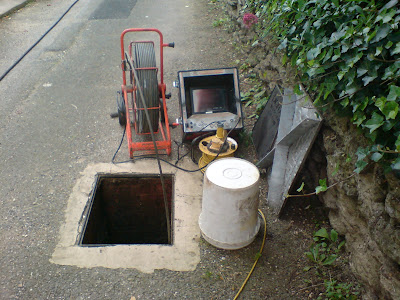 And should I ever forget, apparently we get a DVD! The long winter evenings are going to fly by.

How nice to walk into the bathroom and not hear a strange, baffling, gradually increasing hissing noise.

It started a few weeks ago. Took a while to notice because it was very similar to the noise the toilet makes just before it’s full, and you don’t hang around in the bathroom waiting for the flush to finish, do you? But I became aware that the hissing was still going on.

The mains pipe and waste pipe for the flats above ground level go up in the corner of the bathroom, masked off by some wooden trunking. It was fairly easy to identify the sound as coming from the trunking. The cause was another matter. No sign anywhere of any kind of leak. One thing I thought I knew about this old building: it does not conceal leaks well. When it has a leak, it makes sure everyone knows about it.

A plumber identified the noise as water moving along the pipe rather than coming out, and wondered if someone somewhere had a tap running, or maybe a faulty toilet valve so that the toilet kept refilling but overflowed straight into the bowl, so no one noticed. Checks were performed. No one saw anything. The noise grew louder.

If there was a leak, I thought, then logic suggested the basement flat would be the ones who would really notice. I asked and, yes, they had heard the noise but no sound of a leak. The tenant’s partner’s father is a plumber – he’ll look at it. Oh, good.

Sunday evening, the tenant mentions that water is coming through the rear wall of the bathroom.

Things I didn’t know about the old place: because the pipes visibly run through our bathroom, I assumed they did likewise downstairs. They do not. They are the other side of a partition wall that separates their bathroom from the empty space beneath the front steps. The space is lined with concrete and could do a lot of filling up without anyone noticing …

In fact it was only about 2″ deep. The water was jetting from the mains pipe straight onto the waste pipe, which nicely atomised it and caused it to spread around the cavity as a gentle mist. That was what was accumulating on the partition. Mr Dynorod was called and we heaved a sigh of relief to see that he was a skinny type who could easily fit through the inspection hatch in the partition, which is about the size of a large computer monitor. 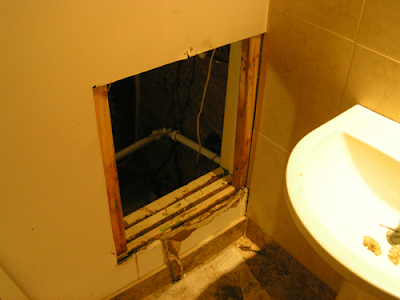 The water drained away overnight, which is kind of a shame because I was looking forward to playing with the siphon pump I bought off Amazon for a fiver. Now to blast the space with heater and dehumidifer.

Tenant’s Partner’s Father hadn’t looked behind the partition for fear of liability – eviction proceedings are already going on and they feared that it might cause damage would be one more thing to hold against them. I could do it as a member of the management company. One very positive outcome of this has been her learning that there is someone friendly and sympathetic in the building – it’s possible she thought we were all in thrall to her landlord. But this is a public blog and I’ll keep that for another time and place. 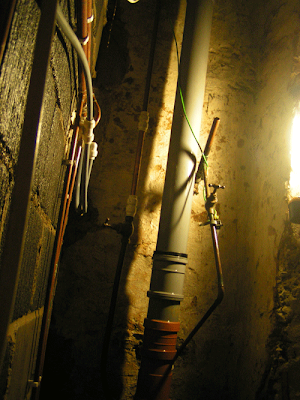