Beauty on the Harwell campus doesn’t exactly jump out at you, but it is there if you know where to look. It helps if the Ballardian post-apocalyptic nature-reclaims-the-works-of-man vibe presses your buttons, like it presses mine.

Tucked away in the north west corner of the site there’s a network of man-made roads being extremely reclaimed: now useful for tasks like teaching Junior Godson to ride his bike (a few years ago) or just strolling on a Sunday afternoon (us, today). 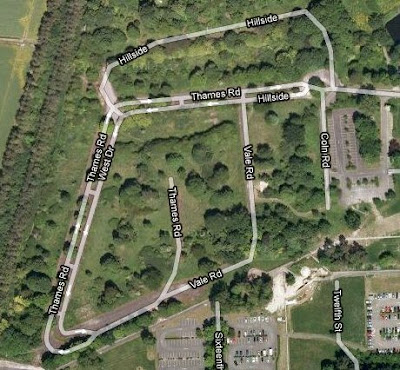 This used to be Hillside. 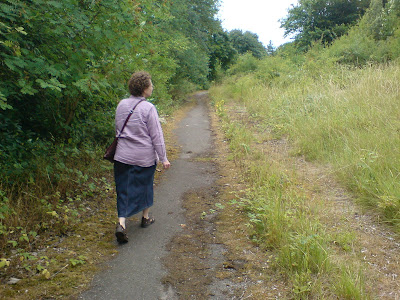 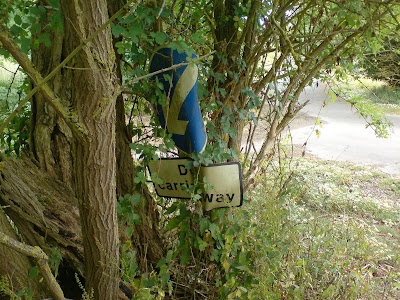 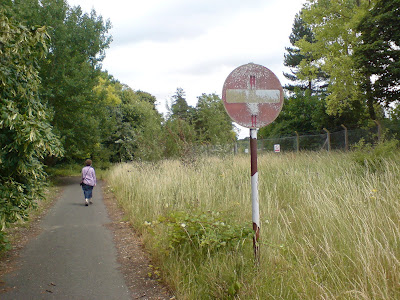 … and indeed (I’m told) up until about 20 years ago this was a post-war prefab residential area. In places the road is all but gone, with only the occasional concrete path leading up to a square clearing of moss in the bushes that once was someone’s home – often with interesting displays of feral ox-eye daisies where the flower beds have burst free of their banks.

[UPDATE: My copy of Harwell: The Enigma Revealed tells me this was once the Aldfield estate, built in 1946 by German POWs. The prefabs were such desirable property that in one case an engineer’s wife stood on the concrete base while the house was assembled around her, in case someone pinched it. They were lovely in summer and freezing in winter, as the walls consisted of two metal sheets with a 4-inch air gap and that was all. A programme to demolish them began in 1986 and by 1991 all were gone. Soviet spy Klaus Fuchs lived at no. 17 Hillside.]
I find it interesting to see how obviously fertile the area is in its natural state. Twenty years after the great plague, Abingdon will probably look a bit like this. Actually, if I was a spaceman who landed here I might conjecture that civilisation had been destroyed by the weird triffid-like thistles that flourish so happily (see foreground, right). 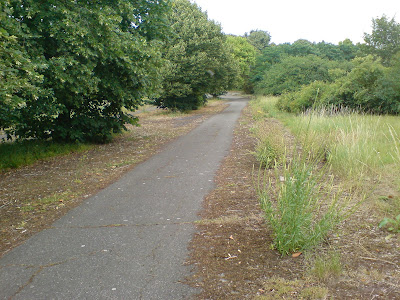 If I was a spaceman I would definitely want to investigate this feature if I spotted it from orbit. It’s the end of Thames Rd in the map above … 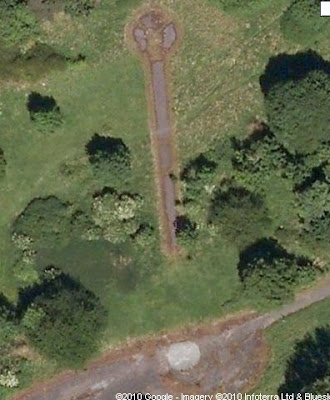 … and looks to me like somewhere that the original inhabitants might have used as a launchpad. Maybe they did. Not much to see from ground level, though. 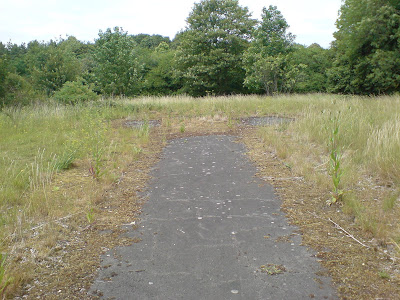 The two-hour lump of cinematic cheese that is Logan’s Run redeems itself with a five minute section where Logan and Jessica come across the post-apocalypse ruins of Washington DC, and marvel at such wonders as an overgrown Lincoln Memorial and Capitol, which unlike the rest of the movie actually look quite convincing. At one point they slosh through a marshy swamp, the camera pans around and we realise they’re wading down the Reflecting Pool in front of the Washington Monument.

That’s a bit what it’s like in the top left corner of Harwell. But only a bit. Or possibly a bit like my favourite part of Prince Caspian, where the Pevensie kids explore the ruins of Cair Paravel.