This is me, in the front cockpit, flying a glider. I seem to have my left elbow resting nonchalantly on the rim of the cockpit which makes it look a lot more casual than I remember it.

I had a father, grandfather and great-grandfather all in the Dorsets, an infantry regiment, so naturally I decided to go into the RAF. My father puts it down to a desire to assert my independence; I put it down to a desire to fly aeroplanes. My four years in the school CCF got me to the grand rank of Cadet Sergeant with marksman badges for .22 and SLR rifles and, of which I’m most proud, my solo gliding wings (which very clearly say AIR CADETS just in case anyone in the grown-up world takes them seriously). 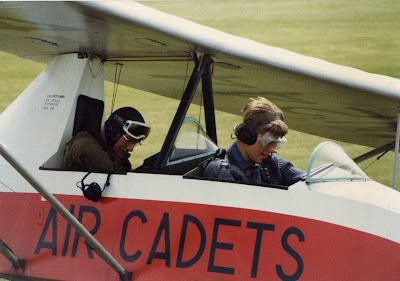 The week was spent in August 1982 at Predannack Airfield near the Lizard, in Cornwall, bunking in the evenings at RNAS Culdrose (which, yes, I know is a naval establishment). I don’t know quite how the instructors did it but it was obvious in retrospect that the first few days were spent assessing the material at hand, and after that they concentrated on the ones most likely to make it, even though everyone got a more or less equal dose of flying time and ground duties. For some reason I was one of the chosen.

The instructor who adopted me might have seen me as his personal project. I remember him as a bad tempered, sour old git but he got results where a nicer, gentler instructor would probably have failed. On the last day of the week, I flew the required solo around the field and here is me being presented with my wings. 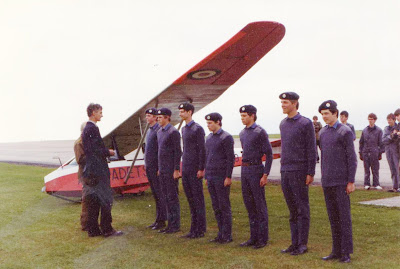 My smile would probably have been quite silly under any circumstances but it becomes even sillier because the distinguished looking senior military gent giving me my wings is my own father. 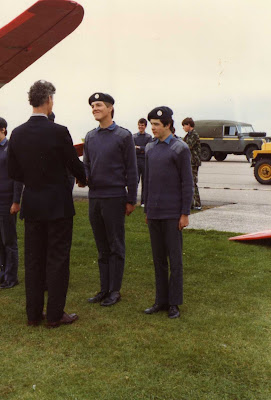 The family were staying with friends nearby and had come to visit me a few days before. The officer in charge of us didn’t take long to work out that being presented with wings by a real live soldier, a Brigadier who had actually fought for his country in anger, was a lot better than the alternative which was getting the wings from a part time Flight Lieutenant (Reserve). My father could always be relied on to take a smart blazer and tie even on holiday, so having something appropriate to wear wasn’t a problem. It was probably the first time he had ever actually seen me in uniform and he said that my too-small beret made me look like an Israeli.

And here are the wings themselves, with the qualifying log book pages. Still got ’em. 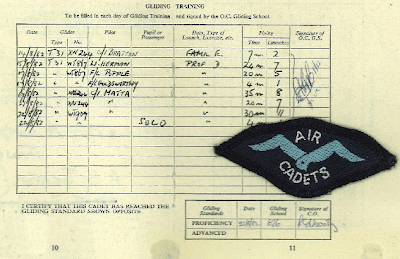