Let no one accuse this woman of being behind the times. Her up to the minute new-fangled web technology intertube thingy still says: 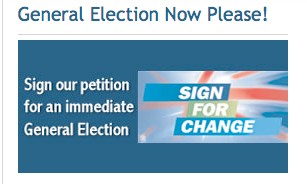 Am I unreasonable to expect a passable degree of web literacy among our elected representatives? Especially from those children born in 1979 who pretty well grew up with it? Or is this just sour grapes? Time will tell.

I’ll be fair. I gather she was a gracious opponent at the recent hustings. Meanwhile, please will the media stop banging on about the utterly dispensable Lembit Opik losing his seat, just because he’s the one with a silly name and lamentable personal life.

… but it’s lunchtime on a cold, grey day and I have an hour to fill.

So, Ben’s prediction for the election: whoever wins tomorrow, the losers will indulge in months if not years of navel-gazing trying to analyse their defeat, and produce a new winning strategy for the next election almost indistinguishable from the strategy that lost them this one. An interesting article by Ben Goldacre explains why. Studies show that people can be comprehensively owned by clear and incontrovertible evidence that is contrary to their beliefs, and not only continue to believe but actually have those beliefs confirmed (in their own minds) by the contradiction. It’s now a scientifically observed phenomenon. (Scientific? Yes: it’s a theory that offers an explanation for observed data and is independently testable and verifiable. Scientific.)

This also explains current behaviour as well as future. It explains why Labour continues to believe that the affairs of man can be micro-managed by legislation, despite an ever more lamentable catalogue of badly written laws: look after the letter of the law and the spirit takes care of itself. On second thoughts, just dispense with the spirit and make do with the ever-more badly written bit.

It explains why even if the Conservatives aren’t quite the party of Norman “on your bike” Tebbit any more (and Cameron, I think, is genuinely trying to distance his party from that era), the spirit still lurks not far beneath the surface. “Phwah phwah phwah what you don’t have a comfortable financial cushion to fall back on at any time phwah phwah how can you not be absolute master of your own destiny it’s all your own fault you know phwah phwah phwah.” And it explains how they can still be the party that can adopt a candidate who ‘founded a church that tried to “cure” homosexuals by driving out their “demons” through prayer’, and believe that a prospective MP with that on her CV is still in with a chance. If Sutton and Cheam is Conservative tomorrow morning it really can only be that the other candidates just didn’t try hard enough.

(It would be fun to be a fly on the wall at one of her exorcisms.

Priest: “Be gone, demons of gayness!”

Demon 1: “Not in these shoes, girlfriend.”

In keeping with Goldacre’s article, of course, failure to produce any demons at all will not dissuade people from trying.)

And it explains why a Lib-Dem government, or even a Lib-Dem-controlled balance of power, just wouldn’t work, because they would consistently expect everyone to be sensible and rational and grown-up and they’re not.

And all of this explains why I don’t particularly want any of that lot to win, but am resigned to the fact that one of them will and I do hope it’s not Labour.