I’m going to have to do a couple of weeks as a snake-handling Pentecostal to get it out of my system. Last week, a requiem mass with smells, bells and Latin. Last night a confirmation service with robes, choir and of course a bishop all mitred and croziered up. I’m just not used to all this high church.

But what a lovely service it was: formal but friendly, exactly as long as it needed to be and with a large element of personal pride. Yes, on Remembrance Day 1995 I became a godfather for the first time. Fourteen years and one week later I formally discharged that obligation. In the intervening years, as a result of a special bulk deal negotiated with the family I also became godfather of my godson’s younger brother. A similar bulk deal presumably negotiated with the bishop saw them confirmed together. For some reason the church only gave a week’s warning, so we packed into the car yesterday and headed down to the coast.

A strangely eschatological element – readings from Daniel + Jesus talking about the last days – but some good singable hymns, ending with “Guide Me O Thou Great Redeemer”, and the bish’s sermon hit all the right spots about being prepared for life. The fact that we didn’t quite get the boys’ parents kneeling at the same communion rail at the same time was just down to the timing of the occasion: it could have happened. Peace was very noticeably offered.

“Well done,” their father whispered to me as the first boy went under the episcopal hands. Well, I can’t claim that much credit but I’m prepared to take every scrap that I can. I was even proud that when the bishop told all the candidates to hold up their confirmation candles, guess whose senior godson was holding his the highest?

And then it was back into the car, returning to Abingdon past midnight and treating myself to a lie-in in lieu of the usual morning writing. Well, it was a special occasion.

I was also delighted that the deed was done by the Bishop of Sherborne. After the service I told him I had been confirmed by one of his predecessors. “St Aldhelm, 705?” he asked.

I say I’ve discharged the duty: obviously I have no intention of just ticking that box and moving on in life. As they get lives of their own they are more likely to be the ones moving on. But right here, right now and with permission of both parents and the boys themselves, here is a very proud godfather with his senior and junior godsons. 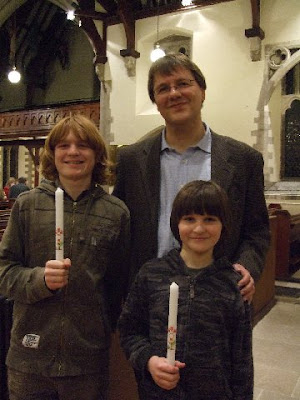