Abingdon is getting a WH Smith and feelings are mixed, mostly inclining towards the “no, thanks” end of the argument. I’m torn myself. The part of me conditioned by childhood says that having a Smiths in town is a Good Thing because … well, because it is. Anyway, a Smiths would be a sign of confidence in the town’s reviving economy which we could well do with. There’s still the gaping abscess where Woolies once stood.

A more realistic part of me observes that everything you’re likely to want from a Smiths,* you can already get anyway – we have a very good stationers, we have two very book shops and, right opposite where it’s going to be, a very good newsagents. They are all privately owned, run by people who know exactly what they are doing and who can help out with your stationery / literary / newsagently needs, and I would hate to see any of them lose business to a national chain.

[*Exception: music. Since the fall of Modern Music and Woolies we have no decent music sellers: Woolies also took with it the DVD market.]

So, by and large I too incline towards the no, thanks brigade. We could maybe do with limited colonisation by some of the national chains. A Woolies replacement would be something else, or a decent clothes shop. Maybe an M&S where Woolies once stood. But we really don’t need a WH Smiths, unless it’s a Smiths that tones down on the books and papers and stationery and really pushes the digital media items.

We could well do with more like this, however. 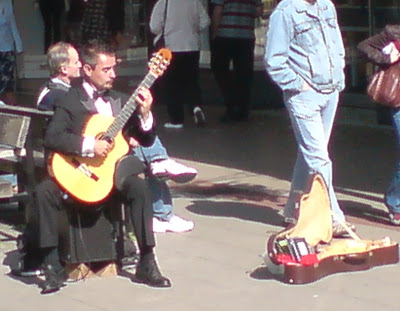 On a sunny September morning he was sitting in the middle of the precinct and delighting passers by with gentle Spanish-style guitar pieces. That’s the kind of thing that makes it worth going into the precinct and, while you’re there, spending money in the shops. And I dropped a quid in his guitar case.