You could go on the Sarsen Trail, choosing either the 7 mile, 11 mile or 26 mile option. Any of these would involve getting up around 5am, probably earlier, and paying money for the privilege of walking through most of May’s monthly rainfall and freezing temperatures across Salisbury Plain, admiring the beautiful views you would be getting on a clear, sunny, warm day. Depending on which of the above options you choose you could also get to hang around in the cold and wet for a minimum of one coach trip to take you back to your starting place. (That’s the 7 miles, taking you back to Avebury. For the other two you park at Stonehenge and a coach takes you to the Avebury starting point. If you bail out at 11 miles then another coach brings you back to Stonehenge. And did I mention all this happens in the cold and wet?)

Or, you could not.

We went instead to the morning service at Sherborne Abbey, for no particular reason except that I haven’t been to a service there since leaving school in 1983, and we had already budgeted mentally for getting up early (just not as penitentially early), and we could drive there in a warm, dry car through the rain and look at the sky to the west and think, hmm, it’s probably still wet for the walkers. And a lovely sung eucharist service it was too, appealing to the senses of sight and sound. The choir were tuneful and skilled and didn’t bang on too long with the set musical pieces; and, despite or perhaps because of five years of compulsory services there, I hadn’t appreciated how lovely the abbey looks. A few centuries ago there was a fire which discoloured the sandstone to a pinkish-red. The place is now decorated with that in mind, subdued reds amidst all the usual ornamental bells and whistles of ecclesiastical architecture, and it works very nicely.

Less nice was the pre-service chat a member of clergy had with the lady sitting behind us, who was obviously a regular. “So, how are you?” Well …” And, unfortunately, she told him, in full symptomatic detail, for about 10 minutes, at the end of which Best Beloved whispered to me, “I don’t want to take communion any more …” She only went through with it after working out that we were sitting in front and so would get to the chalice first.

Then we ate our sandwiches in a layby on the A30 overlooking the Fovant regimental badges cut into a hillside, with the intent of using our temporarily bored-teenager-free window of opportunity to looking around Wilton House. This intention lasted as long as getting through the door of the ticket office and seeing this: 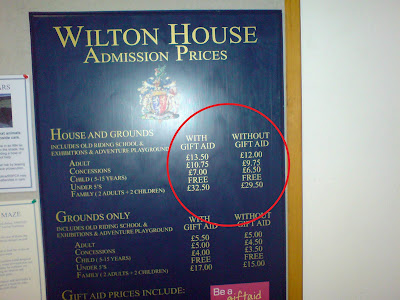 The point of Gift Aid is surely that it augments the price paid at no cost to yourself? So, they expect us taxpayers to pay slightly more than the already high basic rate for the privilege of augmenting their income even further? I think not. Besides, Best Beloved picked up a pamphlet for Mompesson House, only five minutes away and a fraction of the price, so we went round that instead. It’s also a fraction of the size of Wilton House, but even though it belongs to a bygone age it retains the sense of actually being a home that real people lived in, once.

And did I mention how warm and dry all this was?