This is exactly what you want to be the first thing you see when you pop home at lunchtime on a completely unrelated errand.

A hole in the wall by the side of the carpark. 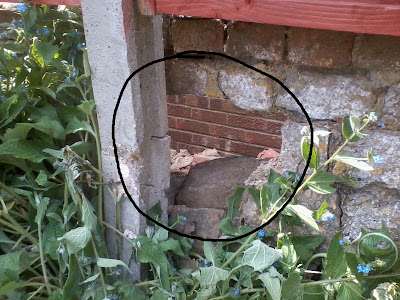 At first I thought it had just crumbled and a couple of stones had fallen out. Then I saw the distinct dent in the concrete post in front of it and had one of those Pascal-like pensées: “some bugger’s rammed this.”
And then I went round to the other side of the wall, which is next to someone’s driveway …
Oh, dear. 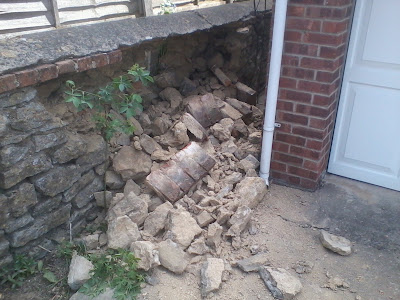 There were no eye witnesses but there were ear witnesses. It happened shortly after 11am, so was probably someone making a delivery rather than a resident. That meant it wasn’t hard to pin down who it might have been and after I’d contacted his company he called me to fess up: a charming Sikh gentleman who had actually been doing a quote for work on our downstairs neighbour’s flat. His foot slipped on the brake, he was going to tell us but then he got a phone call and it completely slipped his mind …
Anyway, all’s well that ends well and our insurers are on top of it. We have however indicated to the owners of the flat that we would rather this gent wasn’t in any way involved in work that might affect the structure of the building. Not if he’s that absent minded.
It would be quite cool if the collapsed wall had revealed some hidden treasure or a map or a dead body or … Nah, no such luck.