I give you: Clanger. 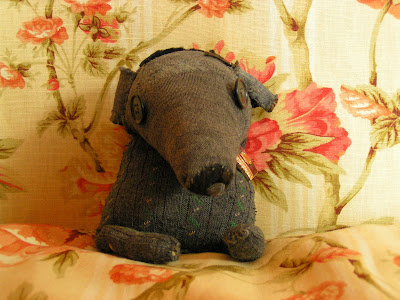 Time was he had the proper feet and pipe-cleaner arms and the ears stuck out a bit more … but hey, he’s old. You could have knocked me down with a feather when at the age of 10 or 11 I learned that clangers are pink. We only had b&w TV, so that’s probably why he’s made out of a grey sock.

What happened to the other sock, I have no idea.

Look very closely and you’ll see he’s wearing a badge depicting the XVIII Congress of the Communist Party of the Soviet Union. Another story.