Today was Abingdon Heritage Open Day, when the nooks and crannies of our own little hometown are opened up to the public gaze. It’s the kind of thing a future Neil Gaiman could write a story about to flex his muscles before going on to write something like Neverwhere. 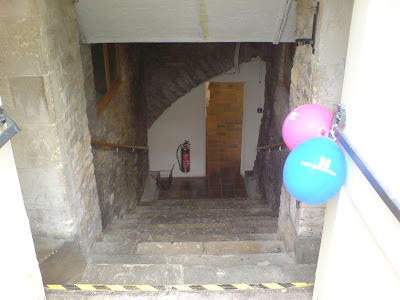 … and encounter a Mamod enthusiast’s wildest dream, the gas-powered engine that used to pump water to north Abingdon. “North” being, of course, a relative term that nowadays could more accurately be described as “central” – the Vineyard, St John’s Road, Swinburne Road, that sort of area. 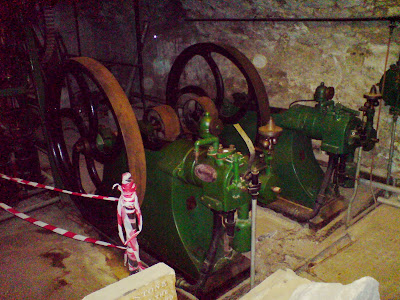 Sadly not working or even moving, though apparently that will change after the forthcoming museum restoration. This was one of the few solid facts to pass the lips of the lady guide down there, who must have said variations on “I don’t know how / why / if …” more times per minute than any other guide I have ever met.

Onwards, and a more mobile relative of the water pump lurks beneath the Abbey archway. Anyone who knows me more than passingly well will detect another reason for photographing it. Anyone who doesn’t will be left dangling in tantalising speculation. 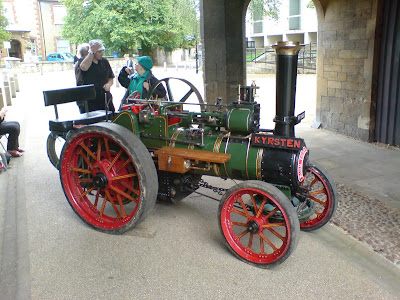 The Abbey Baptist church is Tardis-like, much bigger inside than the exterior would suggest. The main doors rather appropriately follow the Tardis motif. 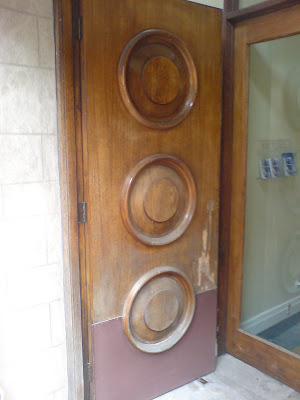 (Unfortunately, this visit meant I had a variant on a classic hymn going through my head for the rest of the day:

“On Jordan’s bank the Baptists cry;
If I were Baptist so would I.
They do not drink, they have no fun,
I’d rather be an Anglican.”)

Behind the Abbey buildings and on the other side of the Long Gallery lurks this secluded little garden, backing onto the millstream which is far too dirty and obscured by overgrowth to be worth photographing. 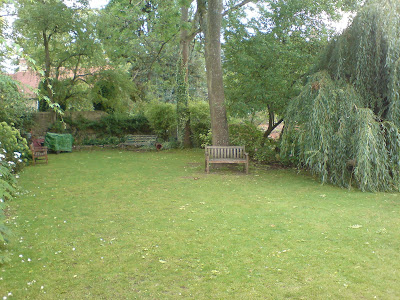 An exhibition in the undercroft includes a vital reference map for any (alternative) historian of what the old Abbey layout might actually have looked like. I can see myself coming back to this. 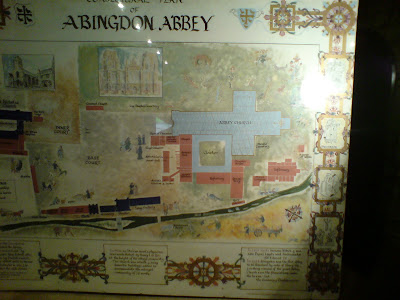 Lunchtime beckoned and so we thought we would leave the attractions of East St Helens Street and the Long Alley Almshouse for the afternoon, which as it turns out with one thing and another will have to be another day in another year. Instead we wondered home via the Abingdon School chapel. Some quite attractive modern stained glass … 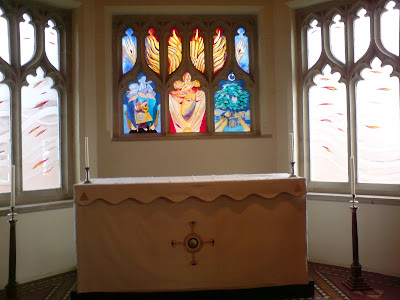 … and an eagle lectern apparently modelled on Sam the American Eagle. 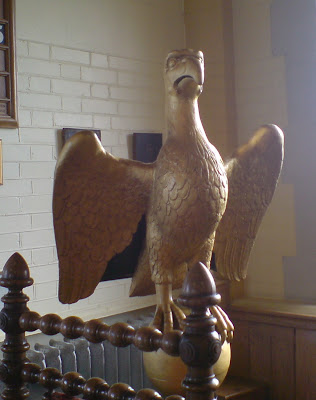 Don’t say you can’t see it.