You might think that SOCA, if you’ve heard of it at all, is the Serious Organised Crime Agency, the nearest Brit equivalent to the FBI, the Untouchables, the high-tech Thin Blue Line that stands between law and anarchy.

You fools, I once thought that too until the scales fell from my eyes as I walked down Park Road this afternoon. The truth was tacked to a tree just outside St Michael’s. 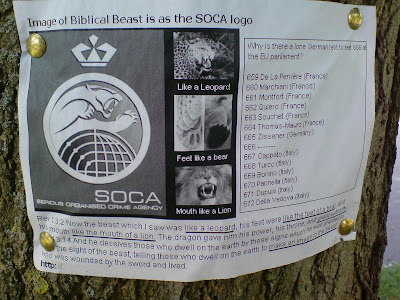 Truly, there can only be one reason that SOCA’s logo resembles the description of the Biblical Beast. Just in case you think that’s circumstantial, there was a URL at the bottom which I have blanked out to preserve your sanity and innocence. Just trust me that it takes you to a very long web page – a lesser mind would say “rambling”, I prefer “comprehensively argued” – that starts with the eye-catching line: “Visiting pornographic chat rooms I discovered the girls were captives […] The girls I met are locked up for an existance of being forced to have sex with animals or Mafia …”

Following that discovery, our hero stumbled across a veritable web of vileness and corruption that involves Google, Yahoo and Serco. He mistakenly took his evidence to SOCA, only to discover that they are in it too, having started well but been corrupted by the Freemasons, an organisation which includes both George Bushes, Barack Obama and Tony Blair. And guess who provided SOCA’s IT systems? Serco. Can it get more conclusive?

Unfortunately it does with screenful after screenful that takes our hero to destinations including Russia, Estonia, Poland and Auschwitz. I then came to a link to Page 2, but ventured no further. There’s a black helicopter hovering outside the window and the doorbell just rang and-