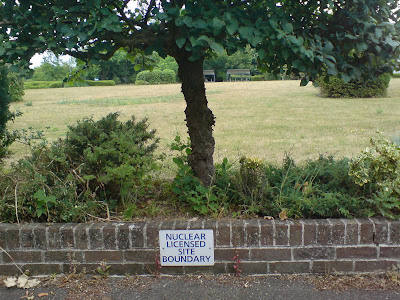 Rather sweet, isn’t it? You get little reminders like this everywhere you walk in Harwell, giving the impression our nuclear secrets are protected by well-maintained flower beds and perhaps invisible forcefields.

Back in the used-to-be, RAF Harwell’s giant aircraft hangars left over from the war were used to house things like GLEEP and other faintly – or even extremely – glow-in-the-dark type toys. This was before they invented cool-sounding names for nuclear reactors, of course. A single fence enclosed every affected area and the bits in between too, and a right pain it was for the rest of us.

Two of the hangars were demolished a couple of years ago (the third still stands) but the fenced-off area remained. Until I noticed, the other day, taking the obligatory two-sides-of-a-triangle route to the shops past the main gate at lunchtime, that the war against terrorism seemed to have been won. No armed guards at the main gate. The barriers stood invitingly open. What gives?

The answer is that they’ve mostly taken the fence down. The seriously affected areas still remain fenced off, including the site of the two ex-hangars which is now a bit of grassland where rabbits can breed safe from predators but at increased risk of mutation. But you can now walk between the fenced off areas. You can vary your route! You can walk straight to the shops from work, hooray. I had no idea there’s a lake in there (technically). And everywhere you come across these little souvenirs, abandoned in place, of what once was. 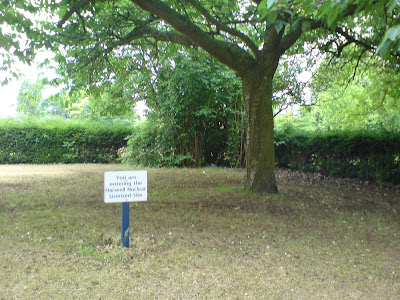 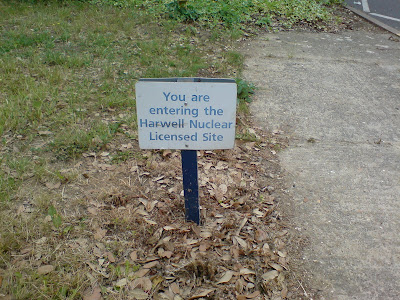