I enjoyed this morning’s Radio 4 Point of View, which was inspired by the government’s successfully fulfilled campaign pledge to repeal the Identity Cards Act. It led into a history of identity documents generally, and made me think fondly of my own Old Blue – my very first passport. (Even if Old Black would be more accurate.) The present EU-standard Little Red Book is a natty little document, true, but it just doesn’t look as imposing as the old one: 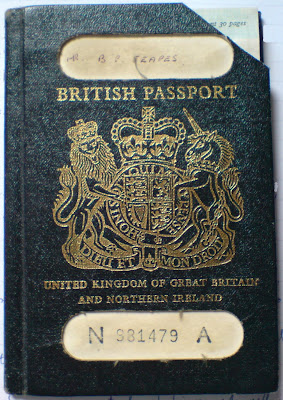 This was issued to me at the age of 12 and made me feel so grown up in all sorts of ways. Just the fact of having my own passport was pretty grown-up, of course, ipso facto: I expect everyone feels that way, except possibly babies who get issued with them (bloody stupid law!) and would just try to suck on them if they could. Previously all my foreign travel had been on my parents’ passports, but now some anonymous civil servant had gone to all the trouble to hand write my name, personally, in the panel at the top of the front cover! I and my sister needed our own passports now because we would be travelling to and from Bangladesh as Unaccompanied Minors; so, my first passport is also the one with the most stamps in. 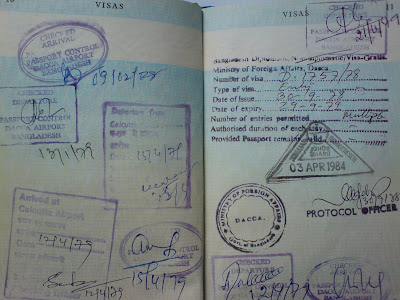 Then there was the message at the front stating that Her Britannic Majesty’s Principal Secretary of State for Foreign and Commonwealth Affairs Requests and requires in the Name of Her Majesty all those whom it may concern to allow the bearer to pass freely without let or hindrance and to afford the bearer such assistance and protection as may be necessary. There was the definite feeling that if Johnny Foreigner tried to give me a hard time he could expect a gunboat to be showing up at his nation’s principal port soon after.
(Astonishingly this message almost survives in the present day passport: just the job title has changed, to a mere “Secretary of State”. Her Majesty still Requests andrequires etc: the editor in me asks, but doesn’t know, why it’s big-R Requests and small-r requires. Still, looking at Best Beloved’s and Bonusbarn’s passports, it seems King Carl XVI Gustav has no particular views one way or the other on what happens to his subjects when abroad, so that’s a tick for QE2.)
One drawback is that 12 is a very silly age to be issued a passport at, because while I might have looked like this at first: 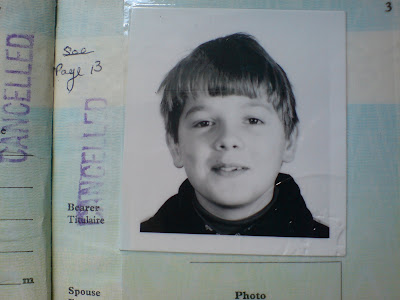 … it wasn’t long before passport officers were visibly recoiling at the contrast between cute child in photo and hulking adolescent in front of them. It was only a five year passport so when I was 17 it could be updated with a new pic on page 13: 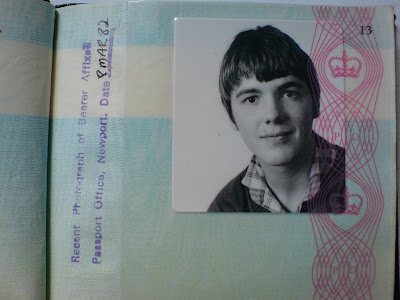 … which looked reasonably like me until I was 22 and got a brand new one anyway. That one stayed virtually unused for the next 10 years: I either travelled within the EU, where they don’t bother stamping, or to Russia which stamps in spades but only on the separate visa with which they issue you, and which they take back when you leave the country so you don’t get anything even as a souvenir, chiz.

By today’s security standards Old Blue is probably riddled with more holes than a Swiss cheese on a machine gun range, and doubtless passports will get more and more high tech as the years pass. But whatever happens – even if they come to exist in virtual form only, or are tattooed in invisible dye on our retinas before we’re born – if they don’t have that message from the Secretary of State then Old Blue will always be superior.