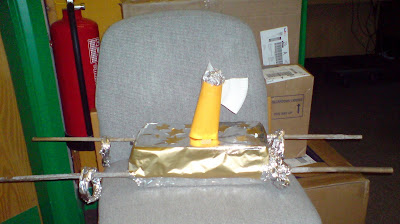 And if you can’t tell what it is just by looking, you’re not my target readership.
While the rest of us were singing “Come down O love divine” with the pauses in all the wrong places, the kids were having fun. Compare it with the original assembly instructions:

10 “Have them make a chest of acacia wood—two and a half cubits long, a cubit and a half wide, and a cubit and a half high. 11 Overlay it with pure gold, both inside and out, and make a gold molding around it.12 Cast four gold rings for it and fasten them to its four feet, with two rings on one side and two rings on the other. 13 Then make poles of acacia wood and overlay them with gold. 14 Insert the poles into the rings on the sides of the chest to carry it. 15 The poles are to remain in the rings of this ark; they are not to be removed. 16 Then put in the ark the Testimony, which I will give you.

Having the rings dangle freely on the poles misses the point a little, but we’ll let it pass. The manual goes on to say:

17 “Make an atonement cover of pure gold—two and a half cubits long and a cubit and a half wide. 18 And make two cherubim out of hammered gold at the ends of the cover. 19 Make one cherub on one end and the second cherub on the other; make the cherubim of one piece with the cover, at the two ends. 20 The cherubim are to have their wings spread upward, overshadowing the cover with them. The cherubim are to face each other, looking toward the cover. 21 Place the cover on top of the ark and put in the ark the Testimony, which I will give you. 22 There, above the cover between the two cherubim that are over the ark of the Testimony, I will meet with you and give you all my commands for the Israelites.”

Okay, there’s only one cherub. This is a high-speed Ark of the Covenant for the modern age, with no time for that fancy wandering-in-the-wilderness-for-40-years malarkey. We intend to take the Promised Land before tea time and a backwards facing cherub wouldn’t be aerodynamic.
Next week: advanced tent making.