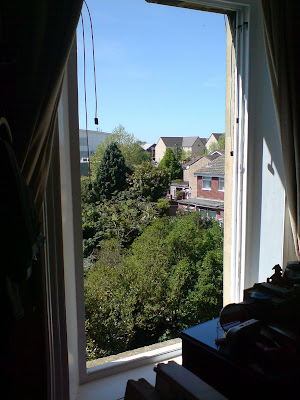 It’s only been almost three years since we had to move out for our windows upgrade, but the weather was nice so we thought we would rush impetuously into it. The point of the upgrade was not just to restore our original sash windows and make them open-and-shuttable, but also to put in place a system that lets you easily remove the sashes from inside the building without recourse to ladders, scaffolding etc for purposes of cleaning or painting.

We didn’t paint – will probably have to do so in another couple of years – but we did clean. Well, Best Beloved cleaned, I just held the windows upright for her. The system works! The outer beading unscrews and eventually comes away, needing a bit of encouragement if your painter three years ago wasn’t quite as good at letting the paint dry before screwing it back in as you had hoped. The beading between the sashes just unplugs. The trick is to unfasten the windows from their cords whilst remembering that they are counterbalanced by heavy weights at the other end, so don’t just let go or the cords will disappear into the walls and never be seen again. Window 1: an hour and a half from first screw out to last screw back in again. Window 2: 45 minutes. Windows 3 and 4 next Saturday, weather permitting.

Meanwhile here is y.t. striking a heroic pose in front of the south facing hole in the wall, gazing down on the puny mortals below who don’t have removable windows and are thus to be pitied. 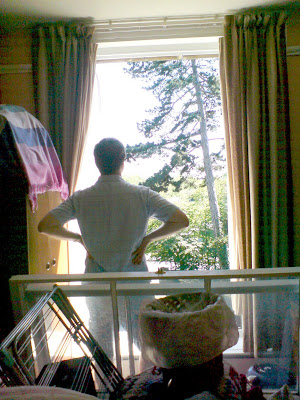