Languishing at home today with an upset stomach but at least I get to enjoy the election media of the also-rans.
The UKIP leaflet is a tad simplistic in bright, primary colours and looks like nothing so much as a supermarket flyer, especially with that pound symbol that tops and tails it. I expect the small print beneath “Vote UKIP” to add “and we’ll give you a box of washing up powder.” 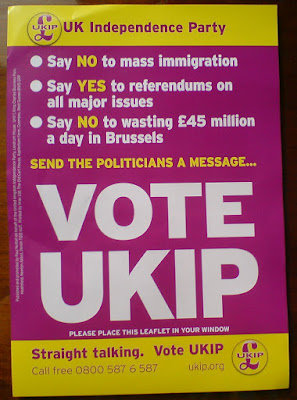 So, about what you’d expect. This one from the Animal Protection Party is much more fun. 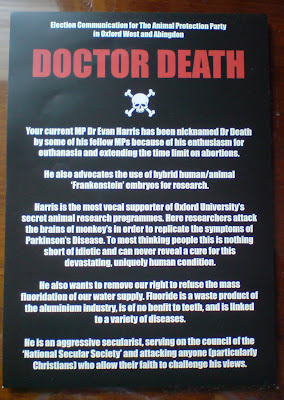 Doctor Death is none other than our very own local MP Dr Evan Harris. He is a vocal supporter of Oxford Uni’s secret animal research programmes – so secret they have vocal supporters. He is apparently pro-fluoride, “a waste product of the aluminium industry” and “of no benfit (sic) to teeth”. He is an “aggressive secularist” (seemed quite a mild one when I met him) who attacks “anyone (particularly Christians) who allow their faith to challenge his views”; and most devastating of all, on page 2 (which I didn’t have the heart to photo) he “uses his position to attack herbal remedies, vitamins and homeopathy”. The swine, the swine, the utter swine.
The implied conclusion I draw from this is that, um, Christians do believe in herbal remedies, vitamins and homeopathy, are against a secular society, and don’t use fluoridised toothpaste? Oh dear. Where do I hand my faith in?
I have no beef at all with Dr Harris. I like the fact that when I hear of him in the public media he’s generally doing something sensible and pro-science. A colleague at work, who is a school governor, tells me he’s not that hot as a constituency MP: missed appointments, unanswered letters and so on, in lamentable contrast to hispredecessor, who may have been all for teaching more hellfire in RE to combat youth delinquency but at least answered his letters. I can only say that of all the MPs I’ve had representing me, he is the only one who has ever actually turned up on my doorstep – and that wasn’t even in an election year. I forget what he was canvassing about but I was impressed.
I also know what he looks like, which is more than I can say for our Animal Protection Party candidate unless the latter bears a strange resemblance to a tortured monkey; and, possibly uniquely for a Lib Dem, he has managed to upset someone. Bonzer!