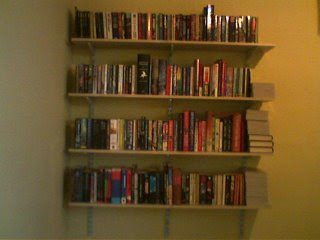 This was my core science fiction collection as of 26 June 2006. Exercising ruthlessly stringent criteria I had whittled it down to these four simple shelves. Since then various of its components have come and gone but the quantity has remained the same.

Until last night, when it got whittled down by a further two shelves worth. We are inheriting a big kind of dresser-thingy which will take up most of one wall and comes up to the level of the second shelf: ergo, at least two shelves had to go. I was as ruthless as the first time round, with similar criteria honed after a further 3.5 years of life-changing events: am I really likely to read this again? And could anyone else benefit more from its ownership?

That second one was actually quite easy to answer, as Senior Godson has turned into quite the SF fan. About one shelf’s worth went to him, the rest to a jumble sale for Haiti. I like to think my selection criteria made sense. Not too light? Not too heavy? Too much sex and violence? Not enough? Is this a classic that a developing young mind should read? And so on. I gave him all the Asimovs but kept all the Clarkes: getting rid of those would be tearing out a piece of my soul.

But. Two shelves down, about 10 titles in from the right, red text on a yellow spine – that would be my copy of L. Ron Hubbard’s Dianetics (and here’s how I came by it). Not really the kind of thing a godfather should give his godson, and not really the kind of thing I feel should be unleashed on the unwitting public via a jumble sale, even for a good cause. So I’ve hung on to it. Ironic that Senior Godson’s father works for the Nuclear Decommissioning Authority: now I begin to understand the dilemmas faced by other purveyors of toxic waste.