I like to think (and I probably flatter myself) that I don’t make many mistakes, but I have to admit that when I do they are ones to remember.

The great flood of October 09 was the crashing opening note of a symphony that goes on to this day, though I do feel it’s in its final movement. The builders performing extreme renovation on the flat above us have never failed to entertain. Next they did something (and we’re still not sure what, and that includes them) to divert rain water through a hole in the roof, down one of their walls and into our living room. That does seem to have improved despite an absence of roofwork. Maybe they put the whatever-it-was-they-moved back.

Next the newly installed boiler upstairs decided to leak, also into our living room. Of course, that’s on the opposite wall so it missed all the carefully positioned buckets very nicely.

Then all was quiet, waterwise, for a while … until on Friday I went into the bathroom, turned on the light, and felt my fingers get wet. Water was very gently dripping down the light switch cord. Not a flood. Drip drip drip. 12 hours was enough to gather about 1.5 inches in a bucket. And it hadn’t been going on for long. This is at the other end of the flat. Our bathroom is under theirs.

And that, to my shame, is what they did, even though it meant over-ruling Best Beloved, because I was persuaded it was the quickest way to get the leak stopped, and they could patch the hole on the same day to the point of near-invisibility. “Near invisibility” might depend on what spectrum you’re using but in the normal range of human sight it’s pretty visible.

Here’s the hole in mid-operation. Don’t be alarmed – even the best appendectomies probably don’t look very pretty halfway through. 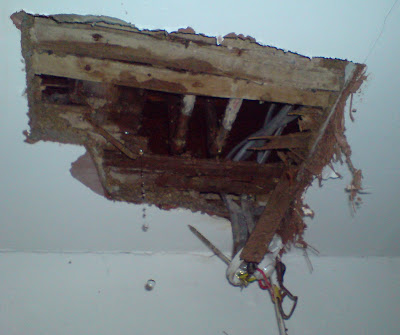 Note the drops of water on the left and the dismantled light switch dangling on the right. The right hand pipe that you see had a pinprick hole in it that was letting out a very thin, fine jet of water.

They couldn’t plug the hole the same day because the cavity was too wet. The next day I left them to it. When I got back the hole was plugged all right … and the muppet who did the plugging had moved the light switch. It used to be slightly to the left as you come into the bathroom. It now hangs in front of the door. You have to go into the room, close the door and then turn the light on; and when you go out again, you have to make sure the cord isn’t caught.

We have asked for it to be redone.

Before work began, I let the flat’s owner know, in writing, that this was a one-off solution to a one-off problem and any further leaks would be dealt with through his brand new bathroom floor. And I suspect there might be some. The leak was a weak spot in one pipe which the plumber thought had been opened up in some old flux because the cold water pipes are now connected directly to the mains rather than to a tank. I know, you’re way ahead of me: if one hole can open up in an old pipe under the new pressure, why can’t others? Time will tell.