A reading first thing, at which I didn’t know 50% of the audience. So if you stick to percentages, that’s quite good. I gave them both the first chapter of the current work in progress and got some suggestions for speeding it up a bit.

Then, out of curiosity, the panel “Polyamory: Not quite as Heinlein described it”. (This doesn’t narrow it down as a subject.) Hmm.

Worth quoting the programme listing here:

“One of our panelists once described poly as “always having someone to miss”. A livejournal poster described the moment of realising she didn’t know which house needed the mustard: others talk of the wonders of Google calendars. Proposed: poly, properly done, is calm, quiet and perhaps a little dull but an awful relief from the drama.”

Right … I’ll let myself be marginally more convinced by the above coming from two people I know and respect on the panel. (Though one of them was the emergency moderator, roped in at the last minute and I didn’t catch whether he is of this inclination.) The other three all cheerfully self-identified as poly but asked not to be identified in blog reports as they are all academics and don’t want this to be the first thing their students learn about them. (But they are all listed in the programme …) Still came away with a sneaking suspicion they were making life more complicated than it needed to be … I mean, drama? What drama? That last sentence sounds like a good description, and an excellent justification, for monogamy.

And suddenly … well, that was it. Nothing more I really wanted to do. I can never decide if cons are always a day too long, or just long enough to let me go home with my head held high and not a backwards look. But my plane wasn’t until much later so I went to see Wall-E, this year’s winner of the Hugo for the best long-form drama.

And what a good film it is! You can’t help but love Wall-E himself, the most anthropomorphic, resourceful, plucky little robot since R2D2. An astonishing amount of design work went into it so that there isn’t a single visual that doesn’t look right but plenty of detail that slips right past you on just one viewing. I also saw it on my last day in Denver last year, so maybe I’m destined to see it on the last day of worldcon for ever more.

It also struck me that this was the perfect response to the polyamory panel. Wall-E is quietly getting on with his life, not minding or even really noticing that he’s lonely … until he meets the one person who can fill the gap in his life, after which he will move heaven and earth to keep her. Wall-E the Polyamorous Robot really would not work.

So, what of the con itself? I would say a well varied programme, though the videos could have been better advertised. The Palais is unspeakably ugly, as previously mentioned, all exposed girders and brutalist concrete … but in its sixties way I found it preferable to last year’s gargantuan sterile airport lounge. The spaces were large enough for a crowd but small enough to feel at home in. 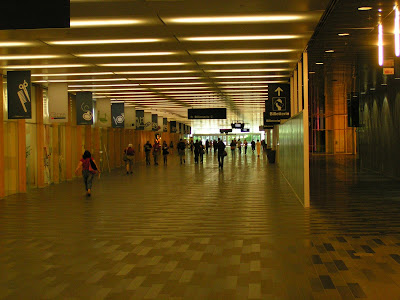 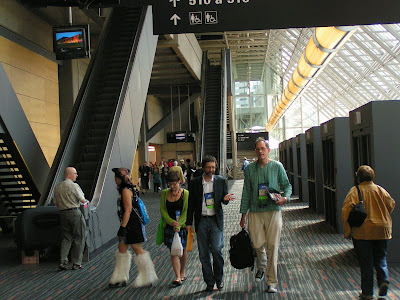 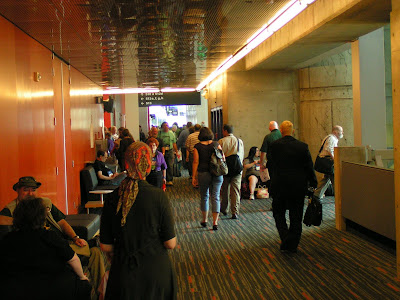 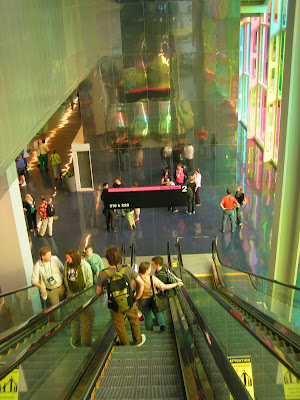 The Dealers’ Room was disappointingly small, not a lot bigger than at some Eastercons, though I gather that’s the fault of Canadian Customs being extra unfriendly this year. Still bought enough books to bust the wheels on my lovely wife’s case.

The badge was inspired, even if I first met the idea in 2002 and it may be even older than that. It’s not just a badge, it’s a wallet, see. So you can put things in it. Unlike most badges it will actually outlast the con by a factor of years. 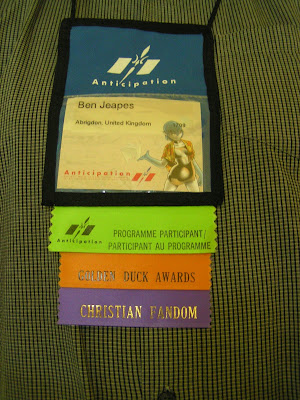 And so to the airport, wondering when I’ll do this again. Not Melbourne next year – though an Australian holiday would be nice, one day, given time and money – and not remotely interested in Reno in 2011. (Both subject to immediate change if I suddenly become Big in the countries concerned.) In fact, maybe not ever again. At my level of fandom it’s not really a time- or money-efficient way of having fun. Let’s see where the career takes me, eh?