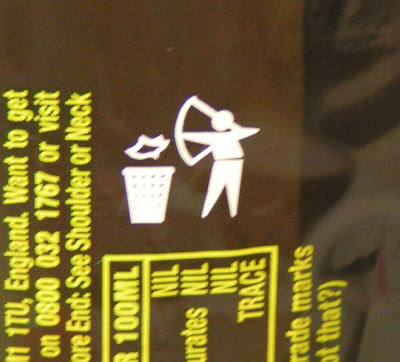 At least, that’s the only interpretation we could come up with for this rather strange little graphic on the label of a bottle of Tango.

Or maybe it’s “Wait until it’s hovering over a bin, then shoot it with a bow and arrow.” Yes, that would be tidier. That must be it.

Said bottle was consumed at our table at the reception following the wedding of Best Man’s Ex in Swanage, which is really what this post is about. The weather was an extremely wet dry run for next month’s holiday in Ireland, but that doesn’t really matter when the proceedings were mostly indoors. Mostly. A brave attempt was made to congregate on the lawn outside the church where five or six gazebos had been pushed together. The problem with gazebos is that their sides slope and so they don’t really tile. Everyone was clustered into neat little squares and you couldn’t get from one to the other without another split-second drenching.

But, a lovely day with the children of both parties being especially supportive. Junior Godson proudly explained to us that now he has two step-parents and two real ones, which I think pleases his sense of symmetry (he was always the artistic one). I got alittle irritated at constant references to how BME had raised two boys on her own … Her ex is quite a good friend (as you might gather) and I know for a fact that he’s been as involved as he possibly can be. But it wasn’t actually her making these claims, just relatives/other guests, and anything that helps close that particular chapter and open a new one is just fine by me.

None of this silly giving away business, either: bride and groom entered by different and opposite doors, met at the foot of the aisle and walked up together. As it should be.