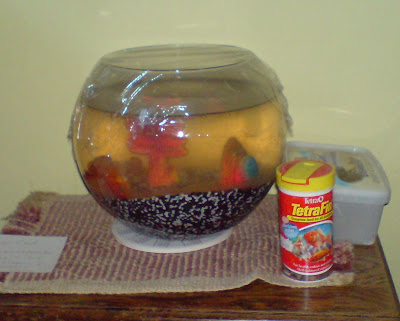 Jimmy, the fish who brought love and laughter into the hearts of literally some, passed away quietly during the night. He (we presume he was a he) was thought to be about 5 but his precise date of birth was never known. His owner, Bonusbarn, was described as “consolable”.

Jimmy is known originally to have been part of a pair, but the other half died very soon after moving into Bonusbarn’s bedroom at his old house, under circumstances that were never fully explained. When asked for his reaction, Jimmy’s mouth was seen to open and close a few times but no words came out, so overcome was he with emotion.

Soon after moving in with his owner’s stepfather, Jimmy moved into enlarged premises of his own, which themselves were placed in the main living room so that all his new family could enjoy his wit and wisdom, though they soon got bored waiting and went away. He spent the rest of his days quietly swimming around his bowl, being constantly amazed whenever he swam past the toy sign saying “no swimming” and composing his memoirs.

A telling tribute to his character was paid by the friends who looked after him while his adopted family went to Sweden earlier this year. At the same time his hosts were also looking after another friend’s hamster, which they discovered to have a habit of horizontal projectile urination, such that they had to surround the entire cage with newspapers. “Jimmy was a much better house guest,” they were heard to say.

He will lie in state until this evening, his bowl covered with clingfilm to stop him smelling preserve the scene for forensic analysis, and then be buried in a private ceremony. Donations to Tesco Garden Centre.