You can grow heartily sick of the Hawaii Five-O theme tune. Surprising, I know, but true. At the annual Abingdon dragonboat event they play it every time there’s a race, and there’s 18 teams in three heats plus a semi final and a final. That’s a lot of Five-O. On the plus side, once you’re on the water you don’t hear it, due to some strange acoustic effect plus the fact that you’re concentrating on the paddling. At the risk of sounding like a Guinness ad, you wait. The word comes. You ready with the paddles. And then you go at it for the next minute, regardless of how much water you’re being splashed with, or wondering how the guy behind you keeps managing to hit you on the shoulder (hitting my paddle I could understand, but my shoulder?), you just keep going, one, two, one, two, and then suddenly you’re told to stop paddling because apparently you’ve made it.
Look very closely at the boat furthest from the camera and you’ll see a guy in a leather hat from New Zealand. The hat, not the guy. That would be me.

You might also notice that the boat is a little further ahead of the opposition. That would be because we won this heat with our personal best of 1 min 5.22 seconds. The Floating Points (for ’twas they) did 1 min 5.50 seconds, which is surely about as closely as you can cut a finish without altering the outcome by observing it. Still not quite enough to get us into the finals, which were for the fastest six teams, but a respectable showing. We’re at the bottom of the score board, but only because we were the last to go in the first heat, against Blazin’ Paddles. We won that one too … 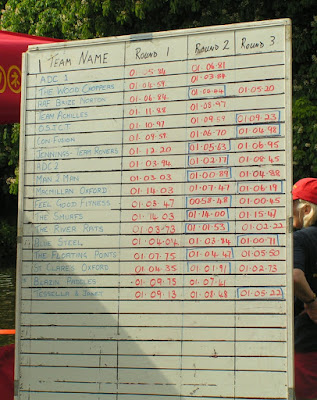 The key, we were told over and over again, is rhythm. A team with less powerful strokes but more rhythm will do better than a team with the opposite. This might be why, in between the endless Five-O, we were treated to possibly the full range of 70s disco beats. We did also get Meat Loaf’s “Dead ringer for love,” which would be anexcellent tune to paddle to … but no, Five-O it has to be.

People might have thought it was very public spirited of the Abingdon gay community to enter into the spirit of the proceedings so, fielding an entire team named Man2Man and getting a place in the finals. Sadly Man2Man is in fact the name of our church’s men’s group. I wish they’d asked, well, anyone before settling on that one, but what can you do?

Anyway, the sun shone, the sky was blue, the joie de vivre was vivacious, Cancer Research got two thirds of however much we raised. A good time had by all. 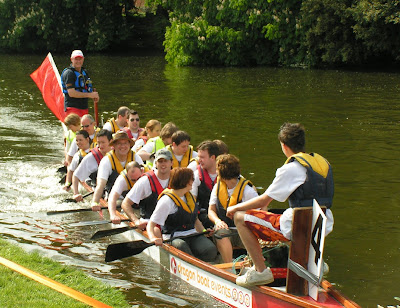