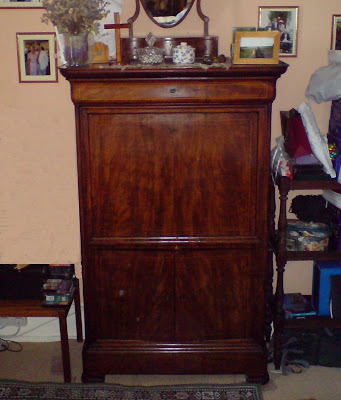 and “… satinwood veneered interior with an arrangement of six drawers”. 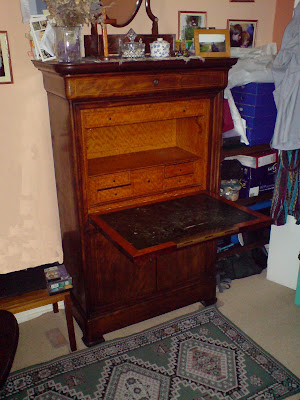 It replaces a much more modern G-plan writing desk, so while we’ve probably traded down in terms of storage capacity we’ve traded way up in style. It now looms over to one side of our room like a TARDIS with a slightly iffy camouflage circuit. If it was a TARDIS then we could have just landed it, rather than have to manipulate it up a flight of stairs slightly narrower than it is with two right angled bends. A good family bonding exercise, not least for Bonusbarn who was squished against the wall on a couple of occasions but took it like a man.

Modern: later the same day, an Oxfringe do at Borders in Oxford on Reading & Writing Sf and Fantasy. A panel of three – Juliet McKenna, Chaz Brenchley and yours truly – talked about what we like to read and write, while an audience of 11 – so at least outnumbering the panel, always a good thing – listened with rapt attention. So, nice people happy to let me talk about myself for a lot. I could get used to that. As Juliet put it in her email inviting me to attend, it was:

“Essentially, a panel discussion of the kind we’re all so used to via the convention circuit and which so many bookshops/libraries regard with awe akin to someone splitting the atom in their back bedroom.”

Well, quite. Let’s hope they don’t catch on. Mark Chadbourn was meant to attend but couldn’t, which sadly meant I was unable to tell him I read his novel Jack of Ravens on honeymoon and still turned in my review of it on time (the five hour round trip to the Scillies did help). The review was only mostly complimentary, but he’s a pro and I’m sure he could have taken it.