During our pre-marital compression and elimination of surplus material goods, Best Beloved somehow managed to get rid of her sewing box, and has been pining for a new one ever since. But no longer, because after months of trawling eBay and second-hand shops we finally found this … 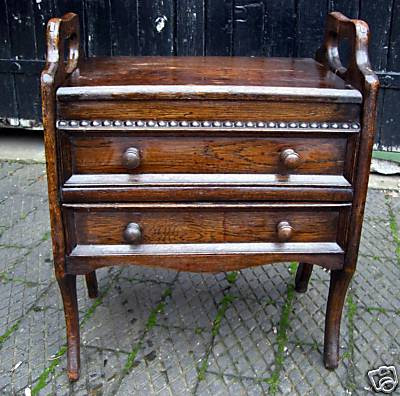 … a solid oak sewing stool from Chissock Woodcraft. This is in the grounds of Yeldall Manor, a rehabilitation centre for drug and alcohol addicts, which teaches them useful craft skills to help them get back into the community. So, we get a nice stool and we support an excellent cause as well.

The place is south of Henley, down one of those nice bits of the Thames valley where the sides are steep and wooded and the road winds roughly along the 10′ contour. Sharp rise and screamingly expensive houses on one side, river on the other. On this, the first decently warm and sunny (if windy) Saturday of the year, it was a lovely drive, apart from those heartstopping moments where the southbound road disappears into a white glare in the low noon-time sun and there’s a bus coming round a tight corner towards you.

We had lunch in Henley itself and wandered around, making the first time I’ve had a chance to look at the town properly rather than just drive through it as a congestion-busting shortcut to or from the M4. I was delighted to see that although it has the usual high street names it’s also heaving with small, independent specialist shops. After Abingdon’s monoculture of opticians and second-hand shops, it was a nice change. But then we remembered that this place too is screamingly expensive – I mean, Heseltine and then Johnson were the MP, remember? – and the denizens are probably used to paying an extra penny or two for good service.

So, anyway, the sewing box is installed, all the other furniture has moved along one space and the item at the end of the row has disappeared into a space-time anomaly which is the only way to make room. Now we just need to sew something. One step at a time, eh?