Boar’s Hill on a subzero January day does a passable imitation of Narnia towards the end of the Witch’s reign. 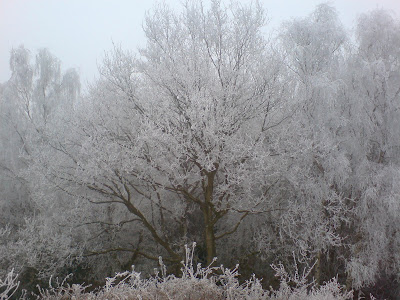 Look close and you see that everything is picked out in lines of frost. It’s like the setting on Adobe Illustrator where you can reduce a picture down to a line drawing. 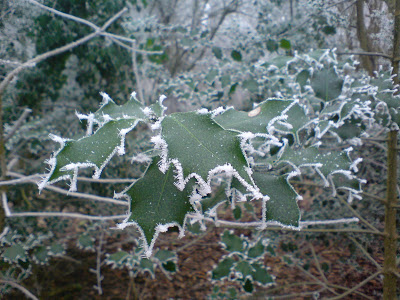 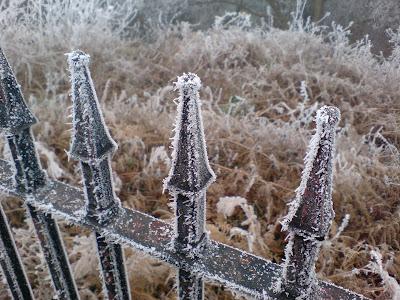 At one point we crossed over a small stream trickling down between two of these exquisitely outlined frosty banks, leading me (sorry) to start gibbering “Aslan is coming! Aslan is coming!”

The event: friend DW, who I must have known for a good decade or more (as opposed to DW, who I’ve known since about 2001 or DW who I’ve known since about 2004) has a birthday at this time of year and always organises a birthday walk with friends drawn from all walks of his life. Ten years ago the group was exclusively adult but suddenly babies started happening, all mysteriously at the same time, leading to a group of kids all about the same age (and mostly male, for some reason). 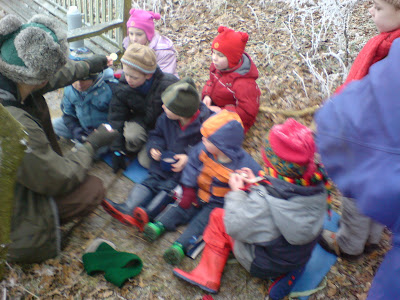 DW isn’t actually giving them communion, just chocolate coins which are of course renowned for their warming effect.

From the Fox, through some fields and frosty woods that are still primeval Oxfordshire and where wolves really ought to prowl, up to Jarn Mound to look at what would have been quite a view if the mist hadn’t been there, then back to the Fox for a warming luncheon. Hardier souls continued with part 2 of the walk, less hardy or those with some serious blogging to do peeled off and headed home.

It just wouldn’t have been the same without the frost, but now we’ve done that, we can have the warm weather now, thanks.